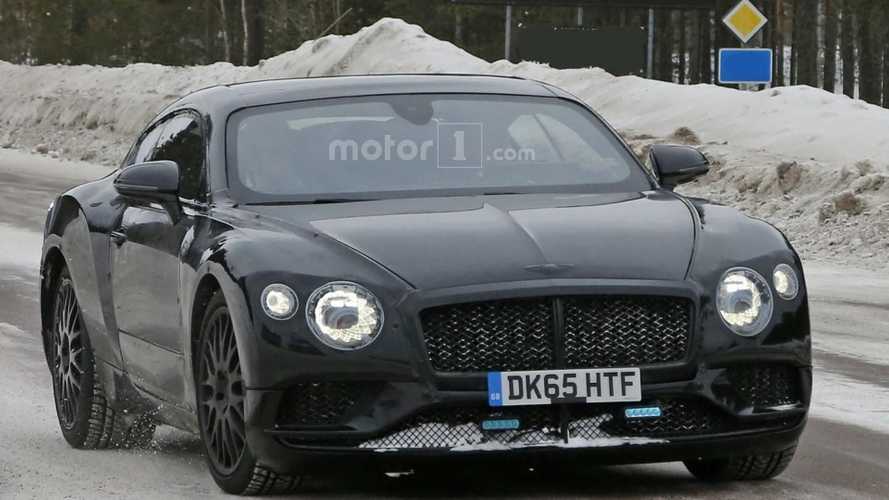 The 2018 Bentley Continental GT was caught out in the open once again performing testing rounds and hiding a substantially sleeker body.

The 2018 Bentley Continental GT was caught out in the open once again performing testing rounds and hiding a substantially sleeker body.

The clever extensive body-colored camouflage can’t hide the lean and mean shape of Bentley’s new 2+2 grand tourer. It actually seems to be a bit smaller and has a more sloped roofline creating a dramatic side profile in the same vein as the EXP 10 Speed 6. As a matter of fact, the full LED headlights are clearly derived from the concept. There are some stickers on the taillights hiding the design, but we expect to find an adaptation of the EXP 10’s oval-shaped slim clusters.

Riding on the MSB platform, the new Bentley Continental GT will have a lot in common with Porsche’s upcoming 2017 Panamera. We should expect a considerable weight loss as a result of the new architecture and this is exactly what the doctor ordered as a current-gen W12 model tips the scales at a hefty 5,115 pounds (2,320 kilograms).

This is the same prototype that was spotted earlier this year when we checked its license plate and found out under the hood it had a biturbo W12 6.0-liter. We assume it’s the new version that powers the Bentley Bentayga SUV where it delivers 600 horsepower (447 kilowatts) and 664 pound-feet (900 newton meters) of torque, but in the new Continental GT it could have a different output. When the new variant of the W12 was officially unveiled last year, the Volkswagen Group said the 600-hp version was just a sign of things to come, with more powerful iterations on the agenda.

Expect to see the all-new Bentley Continental GT brake cover likely in the second half of 2017. While a production version of the EXP 10 Speed 6 concept has already been confirmed, it won’t come out in the near future as Bentley has plans to launch a sub-Bentayga SUV first. The smaller high-riding model is due in 2018 (following next year’s previewing concept), so the production EXP 10 Speed 6 will probably be out around 2020.