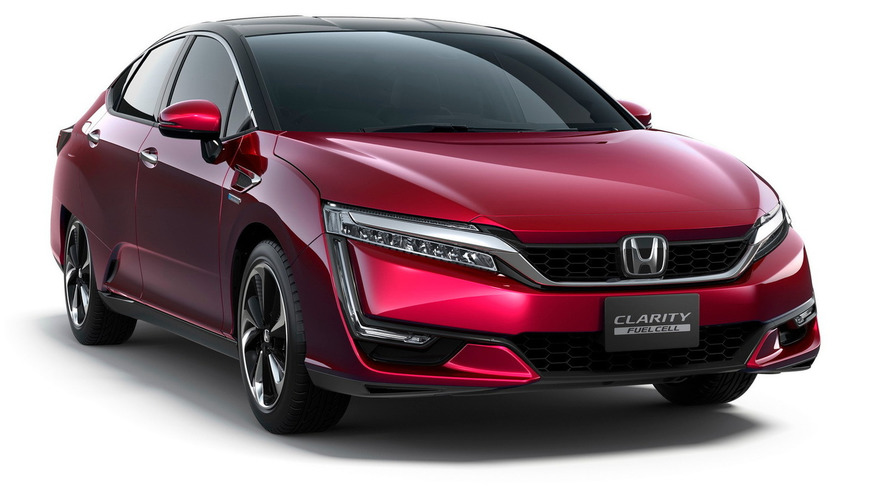 Honda is kicking off sales in Japan of its all-new Clarity Fuel Cell which offers “universal value” and a “cutting-edge appeal”, according to its creator.

Honda is kicking off sales in Japan of its all-new Clarity Fuel Cell which offers “universal value” and a “cutting-edge appeal”, according to its creator.

Billed as being the world’s first five-passenger sedan with a hydrogen powertrain, the 2016 Clarity starts in its domestic market from 7,660,000 yen ($67,445). In its first year, Honda wants to sell around 200 units and will focus primarily on lease sales to local government bodies and businesses.

In terms of technical specifications, the vehicle tips the scales at a rather hefty 4,166 pounds (1,890 kilograms) and is driven by a 130 kilowatt motor generating 221 pound-feet (300 newton meters) of torque. It comes equipped with a 70 MPa, 141 liter high-pressure hydrogen tank which grants the vehicle with a cruising range of around 466 miles (750 kilometers), as per Honda’s measurement in the JC08 test cycle.

As a side note, the EPA rating for the US-Spec 2017 Clarity is expected to exceed 300 miles (482 km.) Once the compressed hydrogen is depleted, a full refill will take approximately three minutes, so it’s just about the same as in a conventionally-powered car.

Coinciding with the model’s launch in Japan, an optional Power Exporter 9000 is also available starting today from 1,180,000 yen ($10,390). It will turn the car into a “power source on wheels” and Honda says it can supply electricity for an average household for approximately one week.

Following its launch in Japan, the Honda Clarity Fuel Cell is programmed to hit Europe and United States before the end of 2016. In California, the model is expected to cost $60,000 and will be available with a “targeted” monthly lease of less than $500.