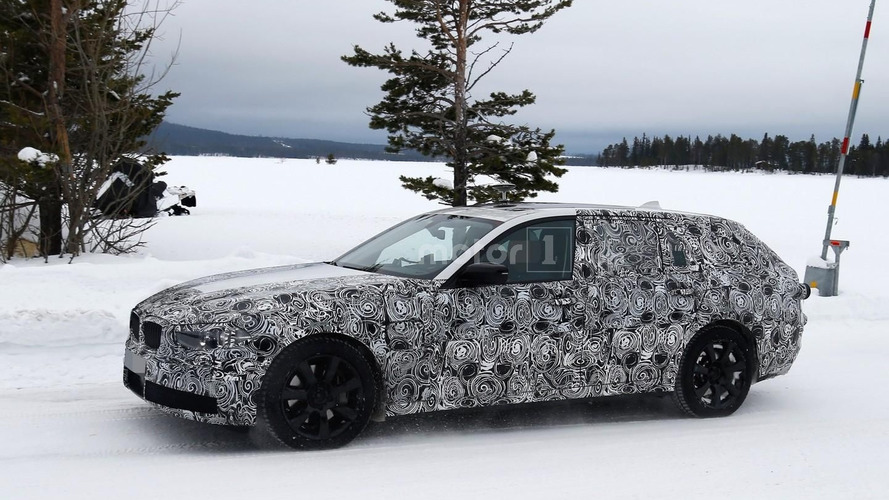 Earlier this week we brought you a fresh set of spy images showing the next-gen BMW M5 and now our spy photographers have spotted the new 5 Series Touring.

Earlier this week we brought you a fresh set of spy images showing the next-gen BMW M5 and now our spy photographers have spotted the new 5 Series Touring.

BMW is hard at work preparing the next generation of the 5 Series and this time around the folks from Bavaria were tweaking the more practical Touring version. This car does not have the production taillights as these are just provisional clusters, but prototypes with the final units have already been captured on camera. The proportions and shape of the car have remained pretty much the same while underneath the disguise we expect to find an evolutionary design.

Compared to previous spy images, the newest set shows more of the new full LED headlights which are slightly different than the ones fitted on the 7 Series and seem to be bigger compared to the outgoing 5 Series. At the back we don’t know yet whether the trunk’s size will grow compared to the current capacity of 19.7 cubic feet (560 liters) with the rear seats in place and 59 cu. ft. (1,670 liters) once you fold them down.

Riding on the newly developed CLAR platform, the 2017 BMW 5 Series is expected to lose up to 220 pounds (100 kilograms). It will be powered by an assortment of upgraded turbocharged four- and six-cylinder engines and there will also be 530e and 540e plug-in hybrids that could be offered in Touring guise as well. A new M5 is on its way with optional xDrive and a beefier iteration of the 4.4-liter V8 that could develop up to 626 horsepower. However, chances are slim of seeing the Touring in the full-blown M5 specification.

The new BMW 5 Series Sedan (G30) will make its first public appearance in October at the Paris Motor Show, so the 5 Series Touring (G31) will likely be introduced early 2017. A 5 Series GT will join the range probably towards the end of that year.