Tech analysis: Why serrated wings have made an F1 return 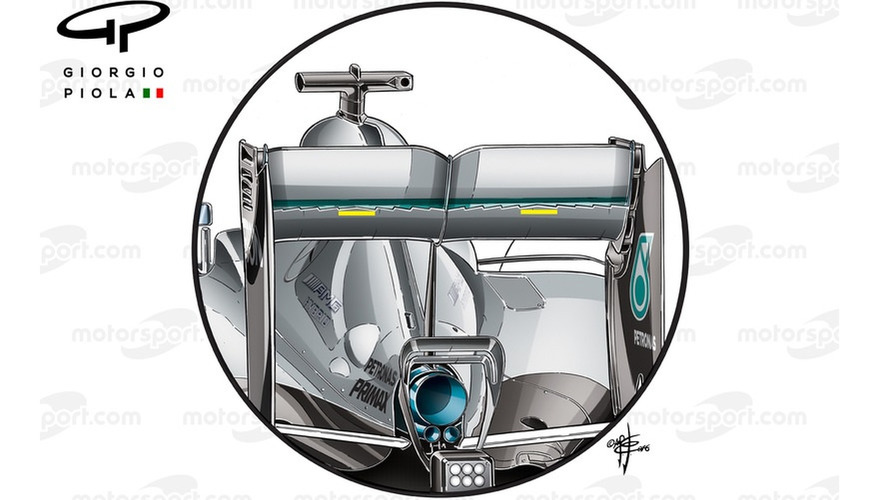 The old saying goes that you cannot teach an old dog new tricks. But in Formula 1, teams often use those old tricks to make improvements, as Giorgio Piola and Matt Somerfield explain. Recently we have seen a trend among teams to use serrated trailing edges on their flaps. It is not a new idea but it is interesting they have returned again to current designs as teams seek ways to find gains within the constraints of very tightly-worded regulations.

Recently we have seen a trend among teams to use serrated trailing edges on their flaps.

It is not a new idea but it is interesting they have returned again to current designs as teams seek ways to find gains within the constraints of very tightly-worded regulations.

Let us start our journey in 2014, at Hockenheim, where McLaren arrived with a new rear wing, inspired by both nature and designs that had gone before.

The trailing edge of the mainplane and leading edge of the upper flap had knuckle shapes carved out, something marine biologists would recognise as tubercles - small nodules found on the dorsal fins of humpback whales.

Research into these tubercles suggests that they improve manoeuvrability, allowing a steeper angle of attack before separation occurs, improving performance through modification of the boundary layer.

At the same time, the span of the surface appears improved, reducing the tip vortex strength and reducing drag.

This was clearly something that McLaren felt at that point in its development cycle was worth exploiting, and could remedy some of its inefficiencies. 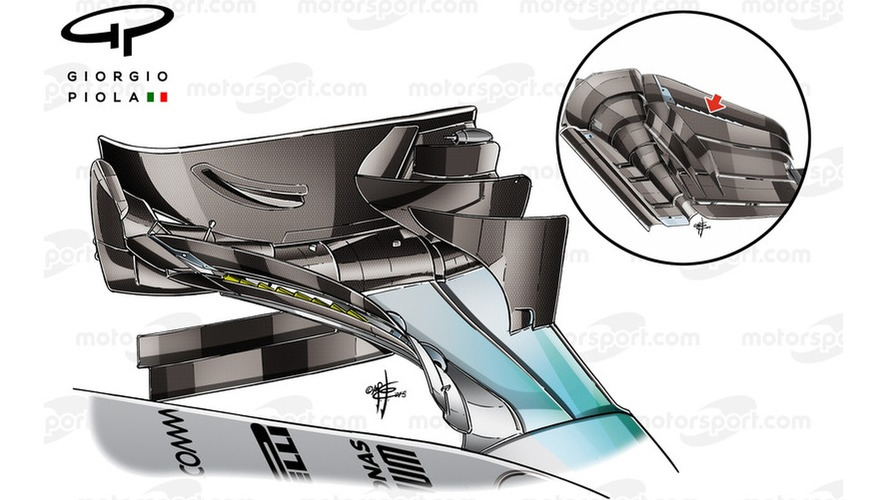 In 2015, Mercedes re-purposed this idea – using it on its front wing instead. It placed a serrated strip on the trailing edge of the penultimate flap.

This not only gave a direct improvement to the flap it was attached to, but also boosted the airflow that shifts the separation point on the upper flap too - improving performance. 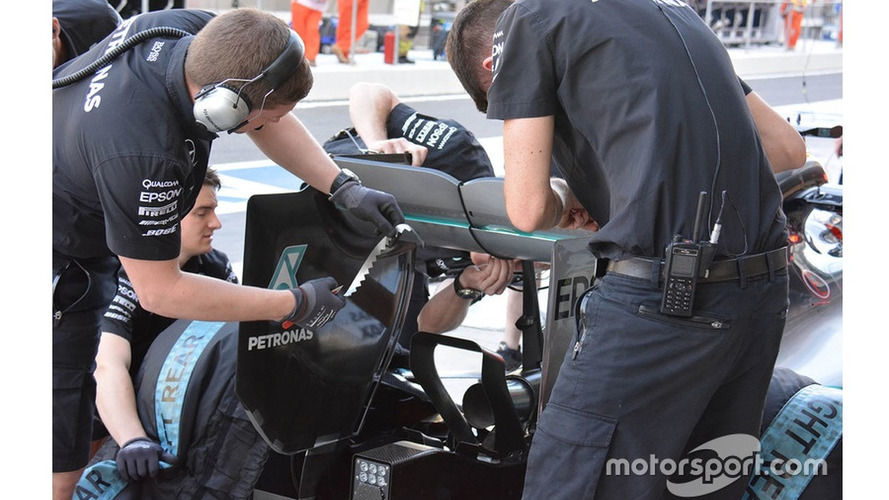 In the latter stages of 2015, Mercedes also looked into the viability of using serrations on the rear wing, something it investigated again during this year's pre-season tests.

As our exclusive photographs show, it used a serrated 'trip strip' (above), mounted at differing heights on the flaps, to ascertain what type of performance it would get in the real world.

It was likely doing this before making a mainplane with the desired serrations. 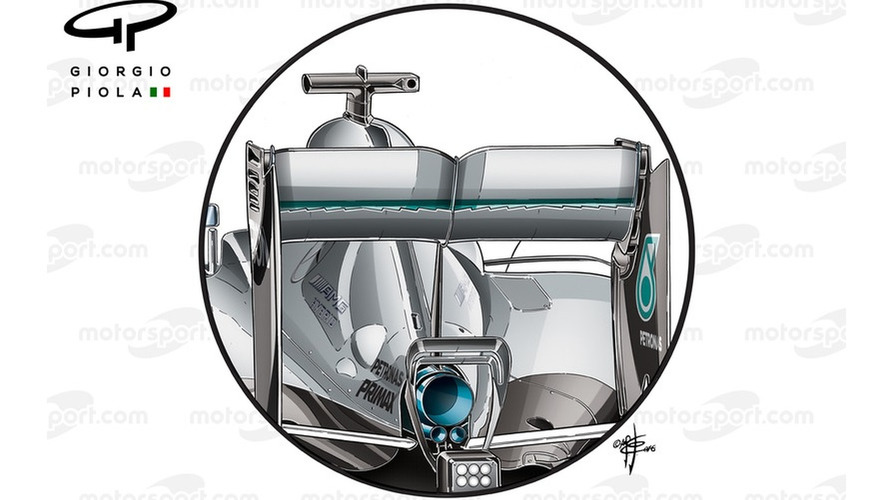 On the last day of testing, a new rear wing mainplane and top flap arrived, matched to the new endplates that had been tested earlier in the week. 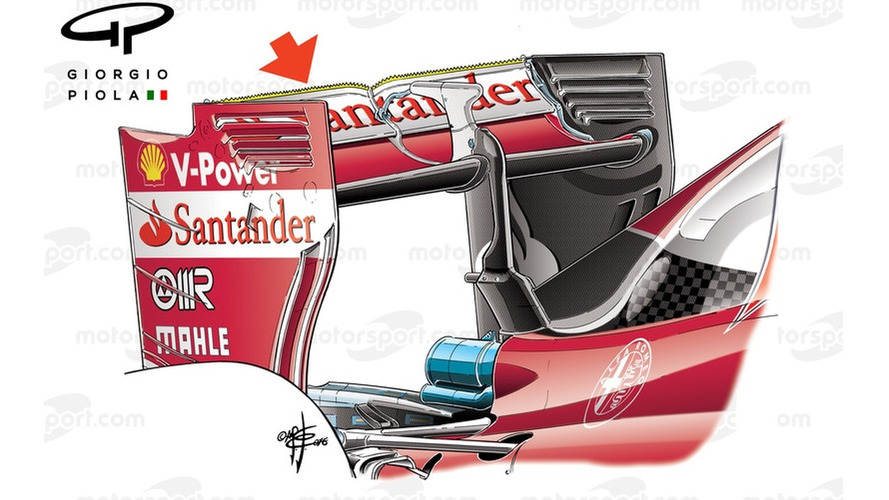 Not to be outdone by the current champions, Ferrari also turned its attention to serrated flaps, with a short-lived test on their rear wing gurney flap on the first day of the second test.

The gurney design is not the first time we have seen such devices used in Formula 1 though, with Williams in 2004 and Renault in 2005 using serrated trailing edge devices in an attempt to improve the overall efficiency of their wings (below). 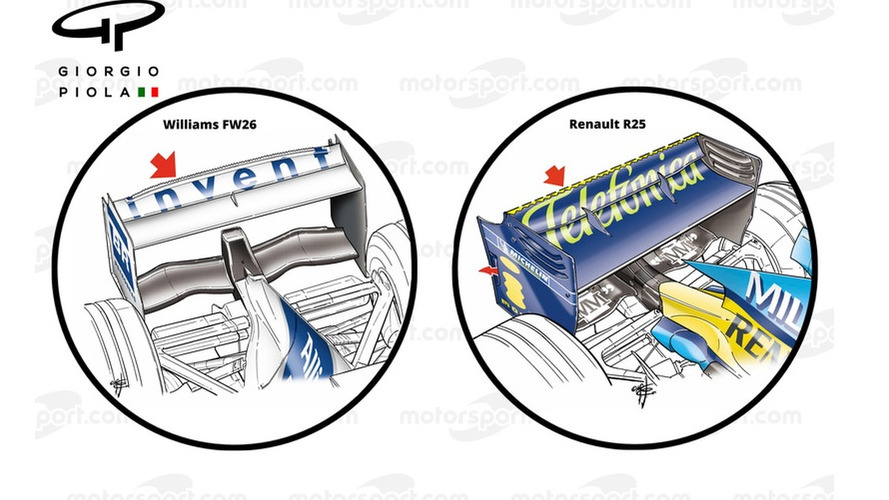 There still seems plenty of life left in some old ideas.

Gallery: Tech analysis Why serrated wings have made an F1 return