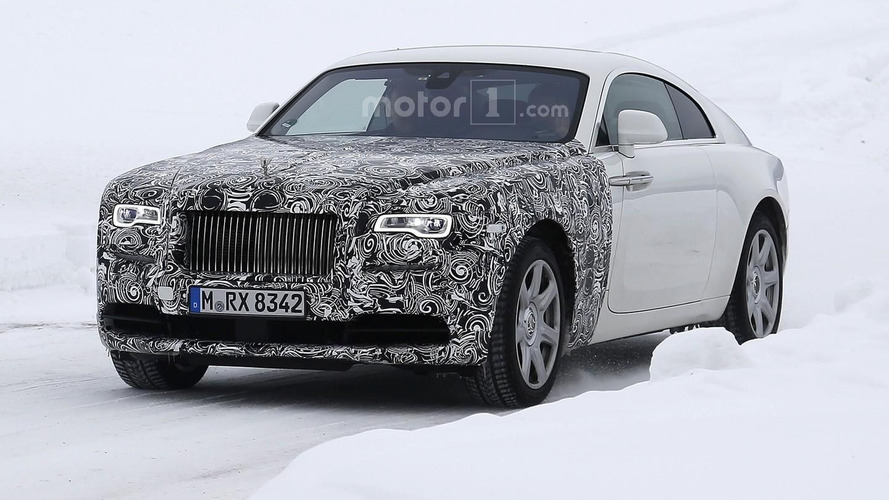 Our spy photographer was on location once again and managed to capture on camera a thinly camouflaged prototype of the 2017 Rolls-Royce Wraith facelift.

Our spy photographer was on location once again and managed to capture on camera a thinly camouflaged prototype of the 2017 Rolls-Royce Wraith facelift.

The test driver didn’t mind at all the prototype was being photographed as he even waved to the camera while the front passenger gave our spy guy the peace sign. For the untrained eye, the 2017 Wraith prototype would probably have gone by unnoticed if it weren’t for the disguise on the front. That’s because the cosmetic tweaks will be pretty much be on a subtle level and are going to be influenced by the Dawn convertible.

Expect the facelift to bring some mild changes to the LED headlight graphics and LED daytime running lights, along with a slightly modified front bumper. The white prototype does not have any camouflage at the rear, but chances are the revised Wraith will have some minor modifications to the bumper and the look of the LED taillights.

While this spy photo batch doesn’t have any shots of the interior, it’s safe to say the 2017 Wraith will come with the 10.25-inch infotainment system borrowed from the Dawn and there could also be some other small updates.

Underneath that long and elegant hood resides a biturbo 6.6-liter V12 which will likely continue to develop 624 horsepower and 590 pound-feet (800 Nm) of torque. While the Wraith isn’t made to take down Nürburgring records, it’s still quite fast as it needs just 4.6 seconds until 62 miles per hour (100 kilometers per hour), despite weighing a hefty 5,380 pounds (2,440 kilograms.)

Rolls-Royce will probably exhibit the 2017 Wraith facelift at the beginning of October during the Paris Motor Show, but an online reveal could occur sooner than that. The current Wraith just received a sinister Black Badge edition in Geneva tailored to a younger clientele.