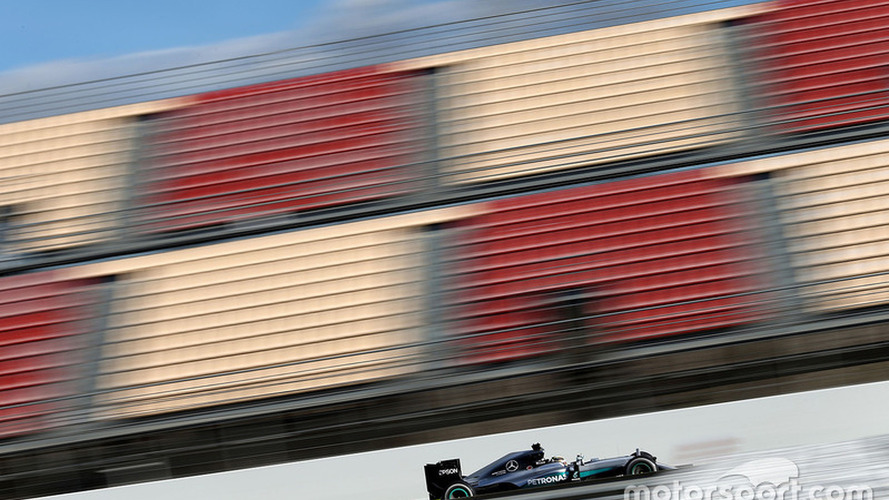 Motorsport.com went trackside at Barcelona with Renault reserve Esteban Ocon to rate the Formula 1 field ahead of the final day of pre-season testing.

Motorsport.com went trackside at Barcelona with Renault reserve Esteban Ocon to rate the Formula 1 field ahead of the final day of pre-season testing.

F1's Barcelona test is a chance for teams to find out exactly how good a job they have done after a winter of hard work.

But it is also an opportunity for those involved at the heart of the sport to catch a glimpse of what the opposition is up to.

The pitlane during testing is a hive of activity, as the few hundred metres of garages and asphalt encompasses the entire F1 world.

For this week's test, Motorsport.com was offered the chance to explore this world with Mercedes young driver and Renault reserve Esteban Ocon to get his views on what he has seen in both the garages and out on track. Coincidentally, this is the very track where Ocon's own career moved up a gear.

"In 2012 I made my debut in a racing car on this track in a Formula Renault 2.0," he said. "It was my first time ever, and I remember seeing this pitlane trying to imagine how it was during the Formula 1 grand prix. It looked huge!

"I also remember that my day of testing in the second session finished because of an accident: so it was not a good debut."

The first garage is that of the new Haas F1 team. Ocon noted with curiosity the difficult first steps the team has taken as it begins its F1 journey.

"When I saw the VF16-H for the first time, I immediately thought of Ferrari and I liked it a lot," said Ocon. "On the track the sound is unmistakable.

"I must say that, the colour, I liked it right away. I have not seen much on track of this car, but for a completely new team, I believe they have so far done quite well." McLaren seems out of place

One of the first surprises of the pitlane in 2016 is the location of the McLaren. The bad results last season have relegated the English team to the bottom of the pitlane.

"Of course, you do not expect to see McLaren so far back in the pitlane," said Ocon. "One can tell when you are looking at McLaren judging by the number of technicians engaged to work on the car: it is the staff of a top team.

"I'm young, but I know the history of this team and I do not believe that this position represents its potential.

"But to be honest, I do not like this car. I speak of its look, not its performance. Even the noise of the Honda power unit is not very good.

"On the track, I haven't seen much, but even if you see that it is a promising project, it is difficult to say where it will finish." Manor set for a big jump

"Just watching Manor on the track I saw a great advance in the car that is parked in the next pits.

"It really has nothing to do with last year's car, which was definitely unstable.

"I believe that the team still has much work to do, but it is already much better than 2015. That is good news for Pascal Wehrlein and Rio Haryanto." Before arriving at the Renault garage, which is home to Ocon, he pointed out to us what has changed and progressed in terms of the pitstops. Now there are traffic lights, monitors, and carbon fibre structures.

"It's crazy, right? And look how fast the mechanics are! If you stop for a tyre change, you do not even have time to clean the visor. When you stop you are already looking at the traffic light to restart. "

Here we are then, in front of the Renault ...

"I have known this team since 2010, when I joined their junior programme as a kart driver. I think from now we can expect a period of great growth.

"After the events of last year, the work on the car that we now see in the pits was really late, and the time available for the engineers has been very little.

"But they have managed to get on track, and now they all have 100 percent certainty that they are working for a company like Renault that has invested in F1 to be here for the long-term.

"I like the livery of this car, it reminds me of the pictures I've seen of the 'Régie' in the photographs of many years ago." In the next garage there's Sauber.

"I know this team well," said Ocon. "The C35 looks quite traditional, but on the track the car seemed very stable. It will be one of our opponents in the first part of the season." As we approach the Ferrari pits, Ocon's face suddenly lights up.

"I was a child and I followed Michael Schumacher's success," he said. "Ferrari is an incredible team, but today they are rivals.

"But the SF16-H seems to be very good. It is responsive in the chicane and I expect it to be close to the Mercedes.

"Watching it on the track, it is easy to deduce that it is a car born well. It is very driveable. The Ferrari is always beautiful to look at, even with the engine off.

"I am a fan of the colour red, but I must say that the new Ferrari gave me a good first impression. Graphically the thing that surprised me the most was seeing the engine cover of the SF16-H in white. I did not expect it.

"I think we will see a good season from this team. They seem very focused and motivated. The competition isn't new, but they know that for them it is a crucial year." "With Force India I have a special bond," added Ocon. "I drove for them in two tests last year. It is a team in which I worked very well.

"There is a nice atmosphere: it is like GP2 or GP3 in terms of the team enthusiasm. I remember when I stopped in the pits after my first kilometres in a Formula 1 car, I was assaulted by a flood of technicians!

"'Why do you want all these people? ' I thought. I used to talk to my single engineer in Formula 3 and GP3, and suddenly I found myself in front of an army of technicians!

"But they put me at ease. I have great confidence in their work, and I bet they will have a good season.

"The VJM09 is the evolution of the ideas seen in 2015, and the direction may be the right one.

"When I watch them, they are very comfortable with the soft and supersoft compounds, but on the mediums they still seem to have a bit of difficulty. But even the Williams on the track has a bit of understeer, although it is nothing serious. "[Williams and Force India] could be rivals to become the third force in the championship, alongside Red Bull. The balance of the Williams looks good to me.

"It remains to be seen whether they finally will be close on the top positions on all types of tracks, and not only on fast circuits.

"Aesthetically, the Williams is very beautiful, and also their pit is well managed." Toro Rosso with a big pair of drivers

When Ocon arrives in front of the Toro Rosso garage, his first evaluation is a bit of a surprise.

"I think this team has in tandem the best drivers – and I put them on a par with the top teams," he said. "[Carlos] Sainz and [Max] Verstappen are destined to have a long and important future in Formula 1, I'm sure.

"I still have no idea of the potential results that they can focus on in the championship this year, but I think they will have a positive campaign.

"The STR11 on track impressed me particularly, and even in the pits you can see that the team did a great job, especially with the rear." "I think you do not have to be an expert to see that [the Red Bull] car on the track is reactive," said Ocon. "It is nice to see. It seems easy to drive, and never appears to react in an unpredictable manner.

"It is no surprise because this team is known to be capable of producing an excellent chassis. But anyway, it is very impressive to see how the car can easily turn into the corners and exit them.

"The Red Bull I like even when it is stationary. This colour scheme at the beginning intrigued me, and I was not sure if I would like it. But then I saw it in real life, it really stood out.

"For Renault there will be a good battle with Red Bull: and the same engine will be useful to evaluate the improvements in their car.

"I don't think there will be a minimum level of information exchange between the two teams." Although he has not yet raced in a single grand prix, Ocon is not only at home at Renault. The French driver is part of the Mercedes junior programme, chosen personally by Toto Wolff.

And although there is no guarantee he will get to drive a Mercedes F1 car this year, it is certain that, alongside with Pascal Wehrlein, he is the future of the German car manufacturer.

Looking at the outfit, he said: "There are many people in this team, and they all did their best to get to the position that they occupy today. They are the reference in F1, and I think it will be tough for opponents to be able to reset the gap.

"While some teams have made progress, I think it will still be a year that is marked by Mercedes – because they never rest on their laurels and they still have a certain advantage over everyone.

"Being here is a start for me, but you have to earn this achievement. So you have to roll up your sleeves and do your best to deserve this opportunity."