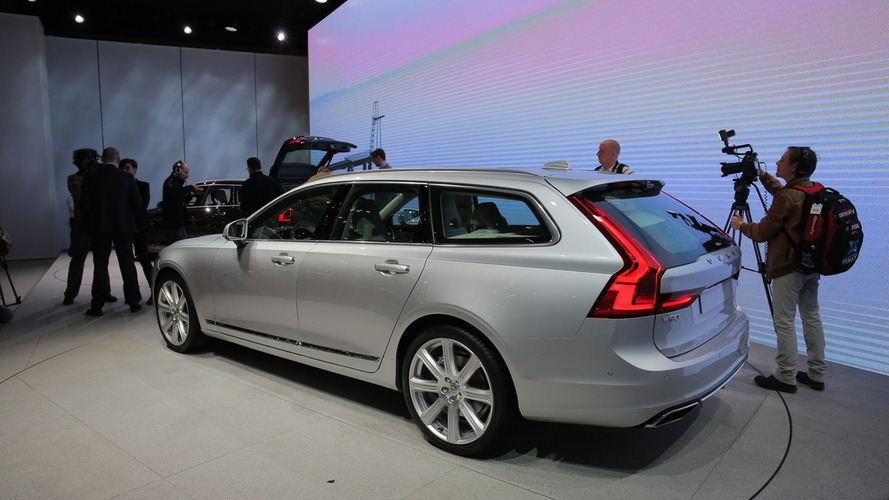 Perhaps even more desirable than the Volvo S90 Sedan, the V90 estate is celebrating its world premiere today at the 2016 Geneva Motor Show.

Perhaps even more desirable than the Volvo S90 Sedan, the V90 estate is celebrating its world premiere today at the 2016 Geneva Motor Show.

Gone are the old days of Volvo’s boxy estates as the V90 has a much more refined design that closely echoes its S90 sedan sibling. While the front half of the car is basically sourced from the sedan, the rear end has more in common with the lovely Concept Estate from two years ago. It might not be as beautiful as the previewing concept, but it’s still a breath of fresh air in this segment and a very appealing alternative to the German domination.

Being an estate, the cargo capacity will be very important for prospect buyers looking for a premium midsize model. Volvo says it will have a total cargo volume of 58.8 cubic feet (1,526 liters) with the rear seats folded and also if you include all the available under floor storage. It’s significantly less than a BMW 5 Series Touring or a Mercedes E Class Estate, but nevertheless it should still prove to be enough for most buyers willing to sacrifice some practicality for the sake of the design.

It rides on the same SPA platform as the S90 and the second-gen XC90 from where it inherits the engine lineup. All of the units have four cylinders and the flagship will be the T8 Twin Engine hybrid mixing up a turbocharged, supercharged 2.0-liter with an electric motor. This will give the V90 a combined output of 407 horsepower (299 kilowatts) and 472 pound-feet (640 newton meters) of torque. If you are not entirely satisfied by these numbers, Polestar is already working on a hotter version which will obviously bring more power.

The Volvo S90 & V90 duo is scheduled to go on sale in the following months all over the world. Following the launch of these two, the Swedes will focus on the smaller models that will all be revamped in the years to come and will be joined by a pure electric vehicle in 2019.