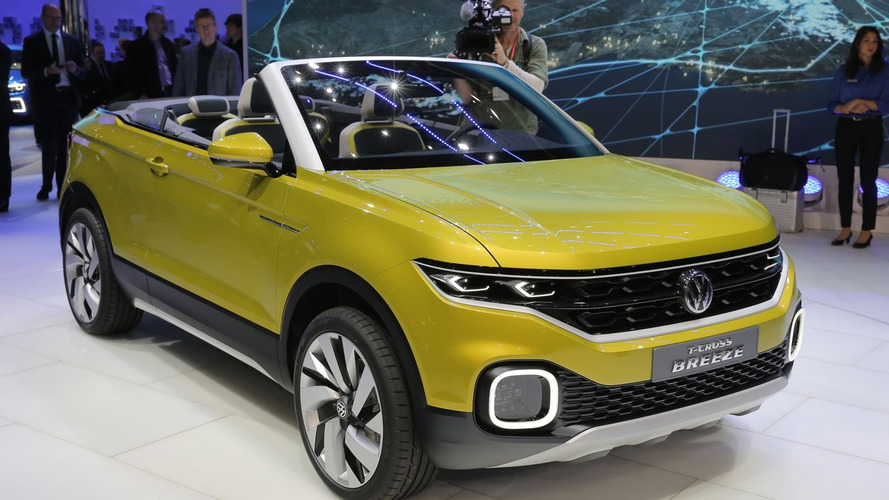 Following a teaser released earlier this month, Volkswagen has taken the wraps off the T-Cross Breeze concept which signals the group’s upcoming Polo-sized crossover.

Following a teaser released earlier this month, Volkswagen has taken the wraps off the T-Cross Breeze concept which signals the group’s upcoming Polo-sized crossover.

The rumors were true as VW has indeed prepared a crossover concept that goes by the name of “T-Cross” for Geneva, but there's a twist. The big surprise is that it’s a cabriolet, hence the use of the “Breeze” moniker. This is a sign of things to come as VW says the concept previews a new family of Polo-sized crossovers that among others will include a version with a retractable fabric roof.

The concept’s styling follows the design language seen in the latest Tiguan, but with some changes to make it stand out. For example, it has a very wide front grille flanked by narrow headlights and comes with large LED rings around the fog lights. The side profile reveals a double character line and 19-inch alloy wheels featuring a spiral design.

Moving towards the rear, the wide trunk lid opens to provide a cargo capacity of almost 10.6 cubic feet (300 liters) and features sharp taillights that also employ LED technology. The body is painted in Summer Green Metallic contrasted by dark plastic on the wheel arches, radiator grille and the lower areas of the bumpers. It comes with a black fabric soft top and adopts a sandblasted finish for the visible aluminum surfaces like the windshield frame, side sills, and underbody protection.

The VW T-Cross Breeze concept has an overall length of 162.7 inches (4,133 mm) which makes it a little bit longer than the CrossPolo. The wheelbase spans 101 inches (2,565 mm) and enables a four-seater interior layout, although legroom in the back seems to be quite limited. Excluding the side mirrors, the open-top crossover’s width stands at 70.8 inches (1,798 mm) while height with the roof up is 61.5 inches (1,563 mm.)

The interior eschews conventional buttons and knobs in favor of touchscreen displays in the same vein as the BUDD-e concept shown at CES in January. The digital instrument cluster aka “Active Info Display” is customizable while on the entertainment front there’s a 300-watt Beats Audio sound system with a subwoofer integrated in the center console.

In terms of power, the T-Cross Breeze concept has a small turbocharged 1.0-liter three-cylinder unit with 110 horsepower (81 kilowatts) and 129 pound-feet (175 newton meters) of torque. Output is channeled to the front axle through a seven-speed dual-clutch DSG automatic transmission which enables the crossover to return 47 miles per gallon (5 liters / 100 km) and emit just 115 g/km. VW says the 10.6-gallon gasoline tank ensures a theoretical range of 497 miles (800 km).

VW mentions that besides a Polo-sized crossover previewed by this concept, it will also introduce a Golf-sized crossover which will follow the footsteps of the T-Roc concept. These will join a seven-seat Tiguan, a new midsize SUV (CrossBlue) for US and China, along with the next-gen Touareg.