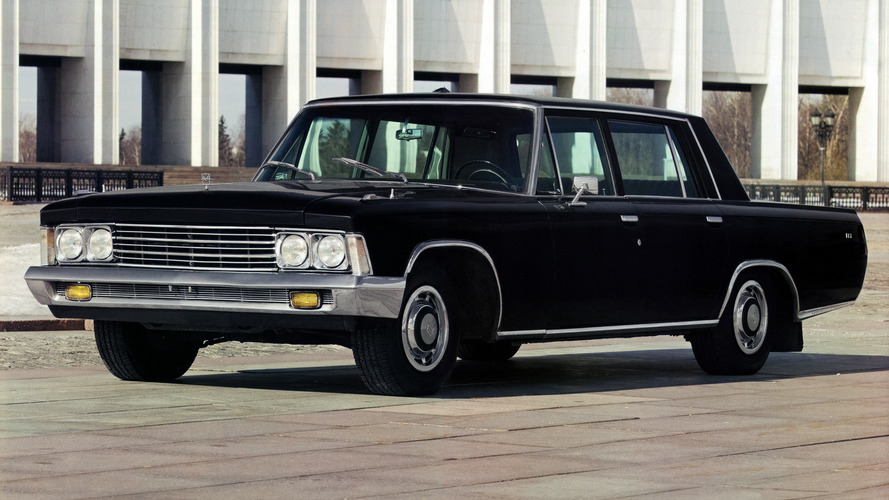 Work on the 117 began in 1968 and the first running prototype was released two years later. When everything was good enough for mass production, the vehicle reached the assembly lines in ZIL’s Russian factory in 1972.

The model shares its 7.0-liter V8 engine with the 114 series, mentioned above. The unit was good for 300 horsepower (221 kW) thanks to a single four-choke carburetor. Power was transferred to the rear wheels through a two-speed automatic transmission, replaced by a three-speed gearbox from April 1975. The claimed top speed was around 118-125 miles per hour (190-201 kilometers per hour). The car offered room for five passengers.

Originally, the 117 was designed as a smaller, more dynamic and maneuverable, and lighter version of the 114 exclusive limousine. Speaking of sizes, the sedan is 5.72-meters long and 2.06-meters wide with 3.3-meters wheelbase. That’s an imposing car at today’s standards but in its era it was positioned below the massive ceremonial and parade vehicles of ZIL and GAZ. Just for a comparison, the 114 is slightly longer than the current Mercedes-Maybach S600.

The legend says the 117 was created at the personal order of Leonid Brezhnev, the General Secretary of the Central Committee of the Communist Party of the Soviet Union from 1964 until 1982. He loved driving and wanted a “driver’s” version of the 114. Actually, he used an example of the ZIL-117 as a personal car in the second half of the 1970s.

While it never had the same level of popularity among the highest state and party authorities as the 114, the 117 was a highly exclusive model as only 50 copies were produced. It was replaced by the mechanically similar ZIL-115, from which 106 were assembled.

Interestingly, the 117 is still very desirable among die-cast model fans with several die-cast makers creating examples of the sedan. A 117 was used in the Casino Royale movie from 2006.