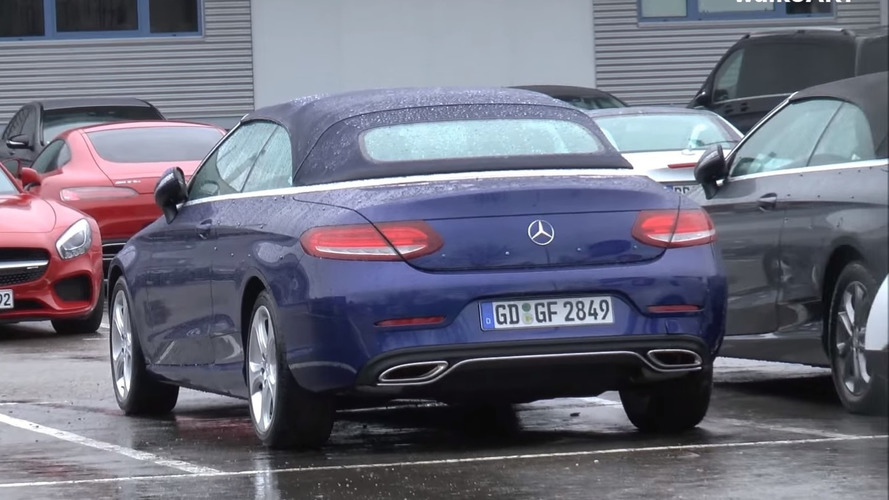 A couple of Mercedes C Class Cabriolet prototypes have been caught on camera without any sort of makeup.

A couple of Mercedes C Class Cabriolet prototypes have been caught on camera without any sort of makeup.

It was only yesterday when Mercedes released a teaser video for the C Class Cabriolet and now we get to see the next member of the growing C family in all its glory. Unsurprisingly, it looks pretty much like the C Class Coupe, but with a fabric roof and a slightly modified rear end necessary to accommodate the top when it’s folded.

Codenamed A205, the C Class Cabriolet will get the proprietary AIRCAP automatic wind protection and AIRSCARF neck-level heating system like all of the other Mercedes-badged cabriolets. The interior will be essentially carried over from the coupe, with the only difference being the added buttons to control the electrically-retractable soft top.

An assortment of turbocharged four- and six-cylinder engines are going to be offered, including the 362-hp biturbo 3.0-liter V6 which will power the Mercedes-AMG-badged C43 Cabriolet. This will be available exclusively with all-wheel drive and an automatic transmission. It will be followed several months later by the range-topping C63 Cabriolet featuring a biturbo 4.0-liter V8 with up to 503 hp in the S model.

Mercedes has already announced the C Class Cabriolet will receive its online premiere on February 29 before going public the next day at the Geneva Motor Show. It should go on sale in the months to come and will be a tad more expensive than the equivalent coupe which in Germany begins at €35,581 for the C180.