Toyota invested $391 million in the San Antonio manufacturing plant specifically for the new Sequoia and Tundra.

The last day of summer in the northern hemisphere was the first day of production for the 2023 Toyota Sequoia. The third-generation SUV is rolling off the line at Toyota Texas, the automaker's large manufacturing facility in San Antonio and the new exclusive location for Sequoia production.

The sprawling facility employs over 2,600 workers, though Toyota says 3,600 employees and 5,300 suppliers prepped the plant for the 2023 Sequoia's debut. $391 million was invested in the location to accommodate Sequoia production, which shifted to Texas from Indiana for the current generation. Toyota Texas also assembles the Toyota Tundra, which has been a staple of the plant since 2006.

"The third-generation Sequoia marks a new era of electrified vehicles that will help move us closer to carbon neutrality while delivering on and exceeding customer expectations for this iconic SUV," said Kevin Voelkel, president of Toyota Texas. "Our team members are beyond proud to add the Sequoia to our Texas-built production line-up and take on new challenges as we deliver vehicles that customers love and fit their lifestyles."

It's been a minute since the 2023 Sequoia debuted. The covers were lifted in January 2022, revealing a completely new vehicle riding on a platform shared with the Tundra and Land Cruiser. However, with the Land Cruiser exiting the market in North America, the Sequoia inherits the mantle of flagship SUV in Toyota's stable.

Taking on that role, the 2023 Sequoia trades the V8 from the outgoing model with a twin-turbocharged 3.5-liter V6 hybrid powertrain. It develops 437 horsepower (326 kilowatts) and 583 pound-feet (790 Newton-meters) of torque, a considerable upgrade from 2022. A 10-speed automatic handles shifting duties. 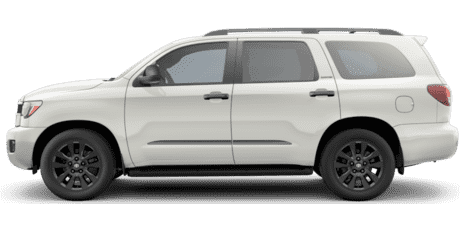 save over $3,400 on average off MSRP* on a new Toyota Sequoia

The powertrain is available across all Sequoia trim levels. That includes the entry-level SR5 with two-wheel drive, though it's pricey at $59,795. By comparison, that's nearly $10,000 more than the base SR5 from 2022. A range-topping Toyota Sequoia Capstone 4x4 will set you back $79,795.