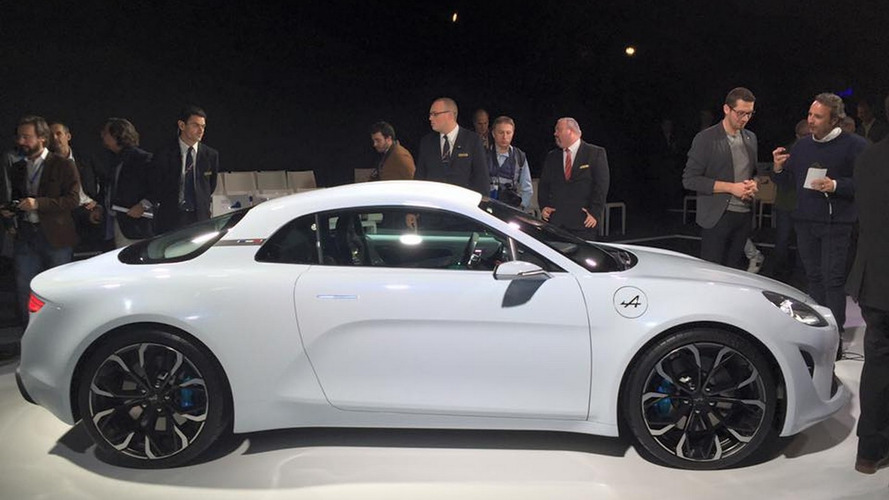 Renault has taken the wraps off the Alpine Vision concept which previews a production model due before the year’s end.

Renault has taken the wraps off the Alpine Vision concept which previews a production model due before the year’s end.

The stunning concept featuring a retro-inspired design was unveiled today during a special event organized in Monte Carlo as a connection to the classic Alpine’s rally success. It’s basically an evolution of last year’s Celebration concept and this time Alpine says the design is 80% ready for the production variant.

Renault-owned Alpine labels the Vision concept as being a “high-performance, elegant, lightweight car dedicated to driving pleasure in its very purest form.” This is a mid-engined vehicle with a focus on a lightweight construction and rumors say the road-going car will weigh as little as 2,425 pounds (1,100 kilograms).

There’s still no word regarding what will power the revived Alpine sports car, but reports are indicating it will use the turbocharged 1.6-liter gasoline unit from the Clio RS. However, the engine is expected to receive a bump in displacement to 1.8 liters and will develop approximately 250 horsepower (186 kilowatts) as standard. The range-topping model is expected to generate as much as 300 hp (224 kW).

Chances are the engine’s output will be channeled to the rear axle with help from a seven-speed, dual-clutch gearbox that will likely be the sole offering. Regardless of transmission, we do know for sure the production-ready Alpine will run the sprint to 62 miles (100 kilometers) per hour in less than four and a half seconds.

As far as the interior is concerned, the cockpit is driver-focused and comes with a limited number of buttons and knobs to reduce distractions. The dashboard sends a bit of an Audi TT vibe and you will notice the cabin mixes up leather, aluminum, and carbon fiber. Two bucket seats with harnesses boost the cabin’s appeal and there’s also a Sport mode which upon activation should make the vehicle more responsive and agile.

An official introduction of the production car will take place before the end of 2016 and the model is slated to go on sale in the second quarter of 2017. If the Alpine-branded sports car will be a success, other models will be launched in the following years, including an SUV.