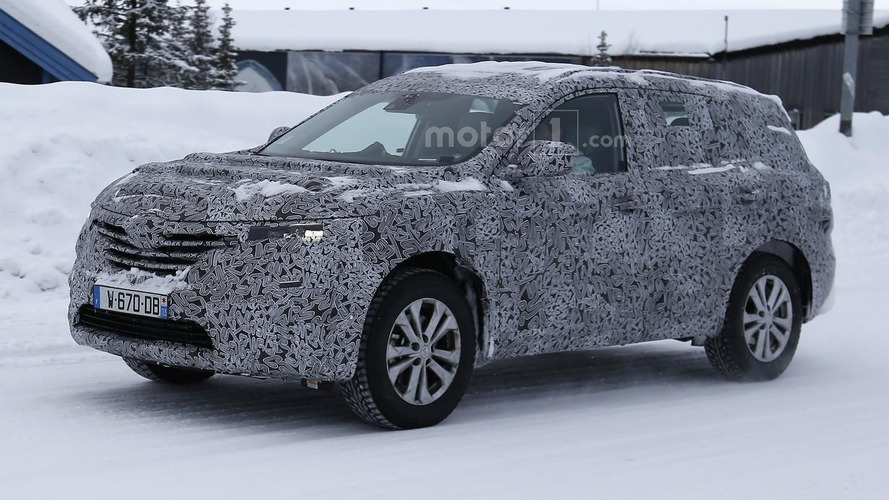 Our spies have sent us a new batch of images with Renault’s upcoming seven-seat SUV while performing final testing rounds.

Our spies have sent us a new batch of images with Renault’s upcoming seven-seat SUV while performing final testing rounds.

The Koleos replacement is long overdue and it seems we won’t have to wait much longer for Renault to introduce its biggest SUV ever. We’ve been hearing the model will lose the Koleos moniker in favor of the “Maxthon” nameplate probably as a way to distance itself from the old model which wasn’t exactly a hit.

Whatever it will be called, the flagship SUV from Renault will have an overall length of approximately 185 inches (4.7 meters) and will be able to host up to seven people on three rows. The prototype spotted by our photographers is still clad in camouflage, but even so it’s easy to notice it will look like a bigger Kadjar with some Talisman design cues, including the L-shaped LED daytime running lights.

Although the attached photos do not reveal the interior, we have it on good authority the cabin will resemble the Talisman and will have that big portrait display seen on recent Renaults.

As far as the underpinnings are concerned, it will ride on an enlarged configuration of the Common Module Family (CMF) platform developed in collaboration with Nissan. The D-segment SUV will be powered by an array of turbocharged four-cylinder engines and will be offered with an optional all-wheel drive arrangement.

It’s unclear at this point when and where Renault will reveal the Maxthon, with some saying it will arrive next month in Geneva while others are indicating an April reveal at the Beijing Motor Show. We are inclined to believe the seven-seat SUV will show up in China first since that will be its main market. In addition, we still don’t know whether Renault will sell the new high-riding model in Europe.