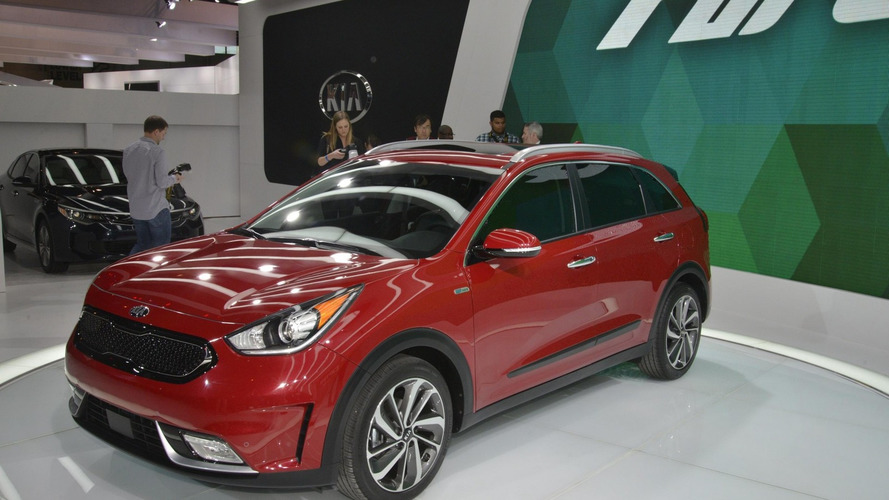 The Chicago Auto Show is underway as Kia has taken the wraps off the 2017 Niro.

Described as a no-compromise hybrid, the Niro is a crossover-inspired utility vehicle that features plastic body cladding, roof rails, and a rear skid plate.  The model also has a slender grille, a tailgate-mounted spoiler, and 18-inch alloy wheels.

Kia didn't have much to say about the interior but the cabin features a three-spoke steering wheel, gloss white trim, and metallic accents.  The Niro also has a push-button ignition, a high-tech instrument cluster, and an UVO3 infotainment system with a seven-inch display as well as Android Auto and Apple CarPlay compatibility.

Engineers focused on minimizing noise, vibration, and harshness to make the ride as comfortable as possible.  As part of this initiative, the Niro was equipped with an acoustic glass windshield, specially designed engine mounts, and equal-length driveshafts.

Power is provided by a 1.6-liter Atkinson-cycle four-cylinder engine, a small electric motor, and a 1.56 kilowatt hour lithium-ion battery.  This setup enables the Niro to produce a combined maximum output of 146 horsepower and 195 pound-feet of torque.  Kia was tight-lipped about performance data but confirmed the model is expected to return 50 miles per gallon combined.

In order to maximize fuel efficiency, the car has been equipped with an Eco Driver Assistance System.  It includes a Coasting Guide that effectively tells the driver when to coast and when to brake.  The Niro also has a Predictive Energy Control system which uses the navigation system and cruise control system to "anticipate topographical changes on the road ahead and actively manage energy flow, seamlessly determining when its best to recharge the battery and when its best to expend stored energy to optimize overall efficiency."