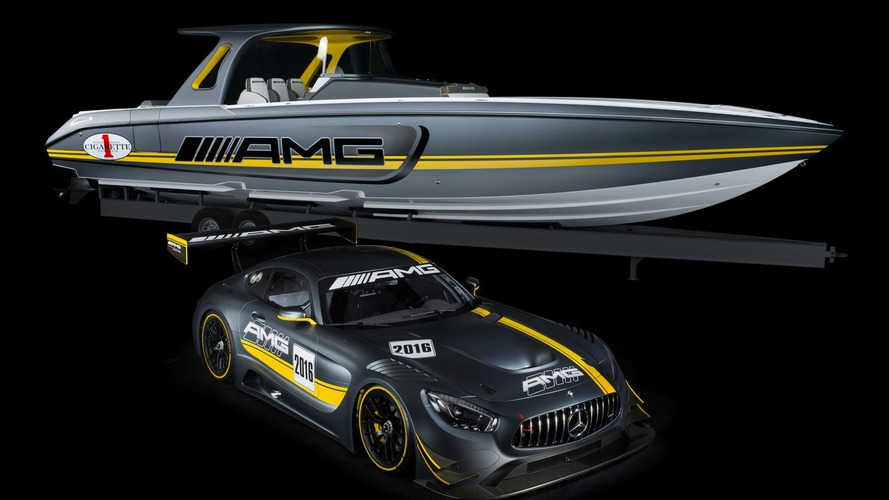 Mercedes-AMG and Cigarette Racing have joined forces to work on a powerboat inspired by the AMG GT3 race car.

Mercedes-AMG and Cigarette Racing have joined forces to work on a powerboat inspired by the AMG GT3 race car.

It’s not the first time when the two collaborate on a boat as over the years Mercedes and Cigarette Racing came out with some spectacular products. In chronological order, relevant examples include the C63-inspired 2012 Black Series 50' Marauder Cigarette, SLS AMG Electric Drive-influenced 2013 Electric Drive, Vision GT-themed 2014 Vision GT, and last year’s GT S-inspired 50 Marauder GT S.

Now, for the 2016 Miami Boat Show which kicks off today, the two have prepared a powerboat that takes inspiration from the track-only AMG GT3. Dubbed “Cigarette Racing Team 41’ SD GT3”, the boat is motivated by a pair of 1,100-hp Mercury Racing engines which are enough to grant a top speed of more than 100 mph (limited).

The 41-foot long power boat has an 11-foot beam and tips the scales at a little over 20,000 pounds (9,071 kilograms). The design is obviously a nod to the AMG GT3 and it also benefits from a complete teak wood floor along with a marine grade leather cabin which makes its debut on a Cigarette boat.

Cigarette Racing Team mentions that pricing is available upon request. To get an idea about how much it costs, we should tell you the 2015 50 Marauder GT S was introduced with a $1.2M sticker.