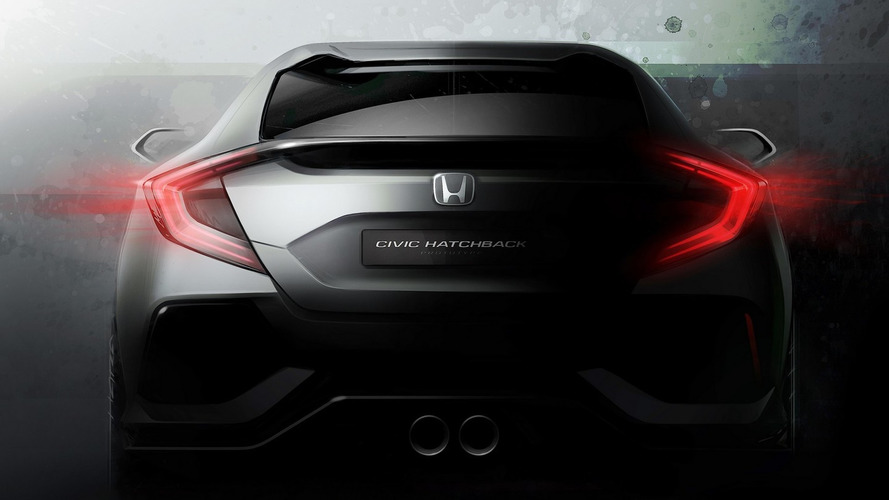 Honda is set to preview the next-generation Civic hatchback with a prototype making its debut next month at the Geneva Motor Show.

After coming out with the Civic sedan and coupe body styles, Honda is getting ready to provide a first glimpse of the five-door hatchback bound to go on sale in Europe at the beginning of 2017. It will be manufactured in the United Kingdom at the factory in Swindon from where it’s going to be exported to a variety of markets, including the United States.

The attached teaser image shows only the rear end which unsurprisingly echoes the sedan and coupe, but with an emphasis on sportiness. It features a beefy bumper with dual exhaust tips mounted in the center and there’s also an interesting roof-mounted spoiler. The taillights shaped like a boomerang are derived from those installed on the other two body styles and are nicely executed on the hatchback.

We already have some technical specifications concerning the 2017 Civic Euro Spec as Honda announced a while back it will be powered by a new turbocharged, three-cylinder 1.0-liter unit. Output is expected to stand at around 127 horsepower (94 kilowatts) and 148 pound-feet (200 newton meters) as seen on a prototype that had a six-speed manual transmission.

The motor will be joined by the beefier turbocharged 1.5-liter unit that powers the Civic sold in the United States. Right now the stronger engine is linked exclusively to a continuously variable transmission, but the 2017 model year will bring a six-speed manual gearbox which will likely make the journey to Europe as well.

Joining the Civic hatchback prototype in Geneva will be the Clarity Fuel Cell making its European debut along with a Jazz Keenlight concept that will demonstrate the customization potential of the supermini.

As a final note, Honda mentions European deliveries of the NSX are slated to commence later this year.