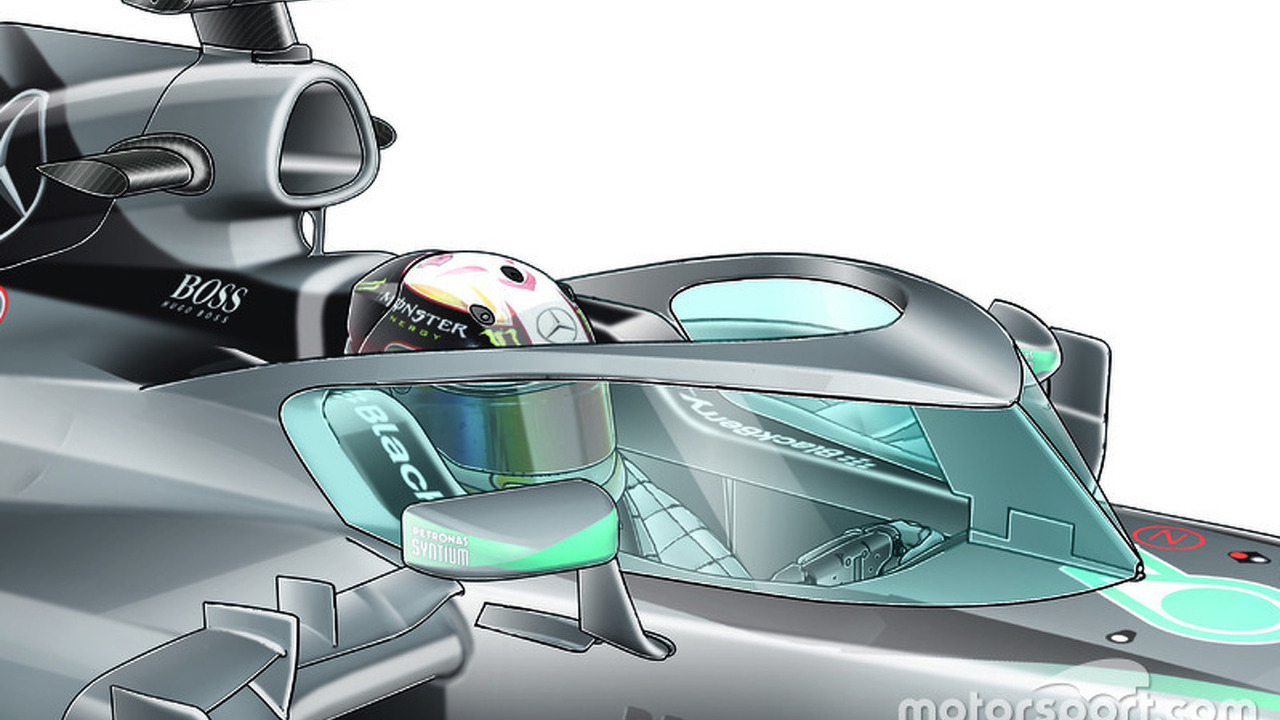 Formula 1's plans for a new ‘Halo’ closed cockpit solution, which is coming in 2017, may include the addition of a clear panel for even more driver protection in the longer term.

Formula 1's plans for a new ‘Halo’ closed cockpit solution, which is coming in 2017, may include the addition of a clear panel for even more driver protection in the longer term.

As Giorgio Piola’s above concept illustration shows, an extra element of clear material - whether it is perspex or bullet-proof glass - could be easily added around the cockpit to further help limit drivers’ exposure to debris.

One version by Piola shows the panel wrapping entirely around the driver, while another – which would remove visibility issues – could have it fitted only at the sides (pictured below).

The idea has already been discussed by teams, but with much more testing needed to ensure it delivers true benefits, the panel concept will be evaluated only after the first stage of the Halo concept has been signed off.

Although the design of F1's Halo cockpit protection system will be refined at the next Technical Regulations Meeting on February 11 – it has already been agreed that the addition of some form of extra screen will not happen for its first season in 2017.

As Motorsport.com reported before the last TRM gathering on January 29, the FIA decided that after successful testing of the Halo idea, there was no point in waiting any longer to address the issue of cockpit protection.

Thus when Charlie Whiting met the 11 team technical bosses at the last meeting he made it clear that its introduction for 2017 was an FIA directive.

In other words it was not a question of whether the Halo would be adopted, but simply about how it would be implemented.

It is accepted by both the FIA and the teams that the Halo is the best compromise of the solutions tested so far, but longer term there is likely to be a move to add some form of canopy.

As an interim, there have been discussions about a halo fitted with a transparent element as seen in our exclusive graphic – but no suitable material has been identified as yet, and for the moment it remains a concept that will not be ready for introduction in 2017.

The issues are likely to be discussed further by the FIA and the technical directors next week include the structural implications of the Halo, and also the weight.

One TRM member told Motorsport.com that the Halo was expected to add 10-15kg at a time when the FIA is already looking for ways to reduce weight.

Wider wheels have already added to the weight of the 2017 package.