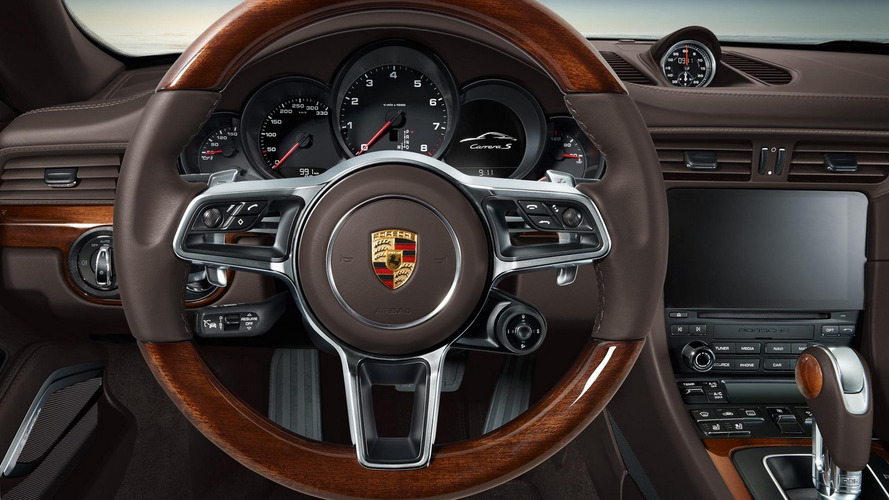 Porsche Exclusive is demonstrating its expertise once again, this time around with a facelifted 911 Carrera S Cabriolet.

Porsche Exclusive is demonstrating its expertise once again, this time with a facelifted 911 Carrera S Cabriolet.

High-end automakers such as Porsche give customers the opportunity to choose from a wide variety of customization options and from time to time the companies propose certain combinations. The latest example is Porsche Exclusive with a 911 Carrera S Cabriolet painted in Jet Black Metallic and equipped with red brake calipers and 20-inch light gray multi-spoke alloy wheels.

The interior cabin catches more attention due to the wood trim which rarely works on a car, let alone a performance model such as the 911. It has been applied onto the steering wheel, dashboard, center stack, and on the door panels and dare we say it blends nicely with the lovely Espresso leather upholstery. You will also notice the Porsche crest embossed on the central leather armrest and several metallic accents to provide a bit of a contrast with the predominantly brown interior.

Porsche Exclusive only modifies a car’s aesthetics, so the 911 Carrera S Cabriolet depicted here comes with the same biturbo 3.0-liter six-cylinder engine. It’s rated at 420 horsepower (309 kilowatts) and 368 pound-feet (500 newton meters) of torque sent to the rear wheels via a standard seven-speed manual or an optional seven-speed PDK.

In terms of performance, the PDK-equipped 911 Carrera S Cabriolet with the optional Sport Chrono package runs the sprint to 62 miles per hour (100 kilometers per hour) in four seconds and tops out at 187 mph (301 kph). Go for the manual gearbox and the maximum velocity increases a little bit to 188 mph (303 kph), but in this case the sprint takes 4.4 seconds (without Sport Chrono).