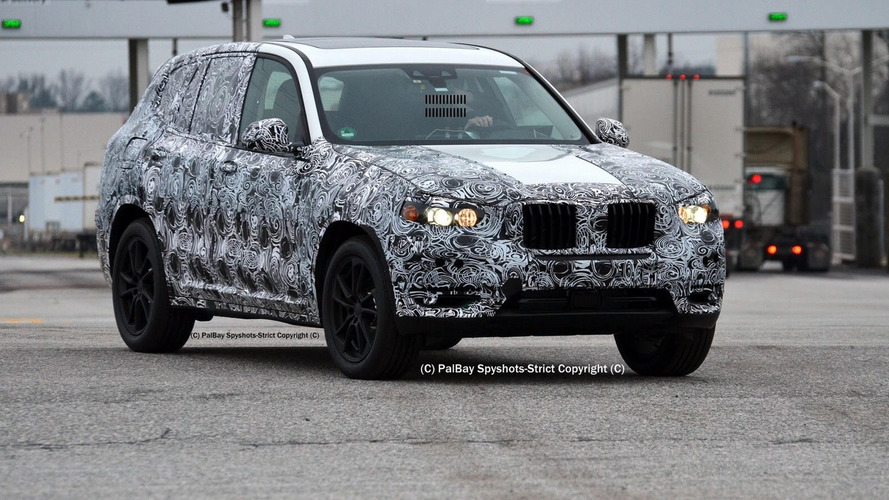 Spy photos reveal BMW has commenced testing in United States of a hot M40i version for the third-generation X3 (G01).

Spy photos reveal BMW has commenced testing in the United States of a hot M40i version for the third-generation X3 (G01).

As the attached spy images show, BMW is making its brand new rear-wheel-drive Sports Activity Vehicle (SAV) a little bit bigger to distance it from the now larger front-wheel-drive X1. That won’t bring a weight penalty because the new X3 will ride on the CLAR platform and this is expected to come with a weight loss of around 220 pounds (100 kilograms). Seen here is an early prototype of the warm M40i model featuring provisional lighting clusters and most likely not all the body panels are final.

Those dual black exhaust tips are essentially sourced from the X4 M40i from where the hot X3 will borrow the turbocharged 3.0-liter inline-six engine. The motor is rated at 355 horsepower (265 kilowatts) and 343 pound-feet (465 newton meters) of torque in the X4 M40i and chances are these output figures will remain the same on the X3 M40i.

In terms of performance, the performance SAV will probably run the sprint to 62 miles per hour (100 kilometers per hour) in 4.6 - 4.7 seconds taking into account the heavier X4 M40i needs 4.9 for the task. We expect the top speed to be electronically capped as usual at 155 mph (250 kph).

Should you need more performance, there is a spicy rumor concerning a full-blown X3 M set to arrive later in the model’s life cycle with the same engine massaged to deliver approximately 500 horsepower.

Another derivative on the agenda is a long wheelbase model, but that one could end up being sold exclusively in China where rear legroom is very important for customers, regardless of segment.

BMW has already announced the next X3 will be built not only at the Spartanburg factory in South Carolina, United States, but also at the Rosslyn assembly plant in South Africa.

It remains to be seen when BMW will show the all-new X3, either in October at the Paris Motor Show or in January 2017 at the North American International Auto Show.