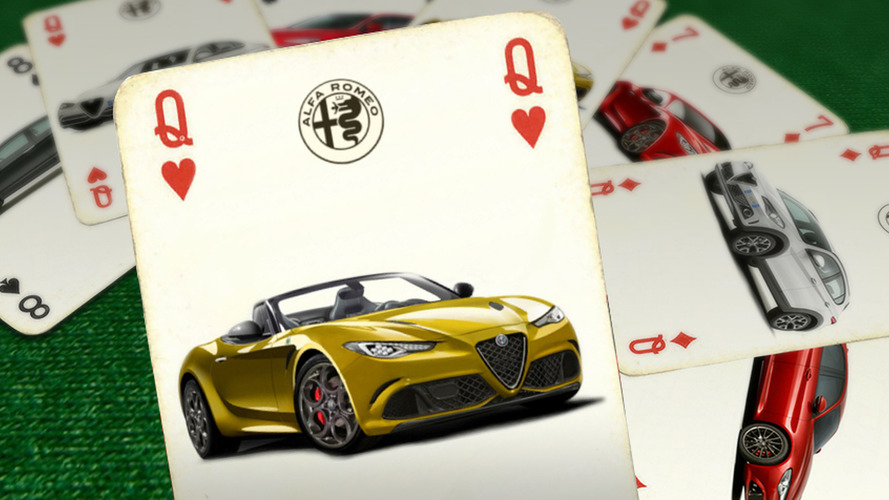 Following the Giulia comes three SUVs, a large sedan, coupe, convertible and finally the Giulietta replacement – all of them rear-wheel drive.

Alfa Romeo's product plan remains intact despite being pushed back by a couple of years due to the latest adjustments of FCA's business plan. Following the forthcoming market launch of the Giulia, there will be a mid-size SUV and at least six more debuts in the four years between 2017 to 2020. They include: a large sedan, two SUVs, a coupe and convertible, and a compact sedan intended to take over the legacy of the Giulietta. All will be based on the platform dubbed “Giorgio” which denotes longitudinally mounted four- and six-cylinder engines and all-wheel drive. Here at Motor1.com we tried to envision the styling of the whole new range of Alfas based on rumors and attributes introduced with the new Giulia. After the Giulia, the most important model, which is coming by the end of 2017, will be the brand new mid-size SUV with an average length of about 4.7 meters. It will compete against the likes of the Audi Q5, BMW X3, the Mercedes GLC, and the Jaguar F-Pace. Similar to the Giulia, the engine range will consist of a 2-liter gasoline engine with 200 or 280 horsepower and a 2.2-liter diesel producing 180 hp or 210 hp. Furthermore, there will also be two hybrid powertrains which including a “mild” 48-volt system in addition to a V6 plug-in version with a rechargeable lithium-ion battery derived from the Chrysler Pacifica and also intended for Maserati. The C segment SUV in 2018 will be more compact in size (4.5 meters long) and target the Audi Q3, BMW X1, and Range Rover Evoque. According to our sources, the C-SUV will have a setting for slight offroad capabilities while also having a sportier shape with a more coupe-like roof profile and therefore somewhat closer to the crossover segment. For the C-SUV there will be only four-cylinder engines to ensure levels of fuel consumption and emissions. 2018 is also the year of the third SUV, derived from the mid-size model, but with a distinctively more sporty look. This is characterized by a coupe-like silhouette with a roof profile that integrates with the rear window in a sloping fashion. The sporty credentials might be further underlined by more powerful engines and a Quadrifoglio Verde version producing at least 450 hp like the Giulia. It will give competition to the BMW X4 M40i, Mercedes GLC Coupe and Audi Q6, particularly in their AMG and RS guises respectively. The classic with resolve

2017 will be the year of the flagship, a sedan almost five meters long and intended to give battle to the Audi A6 / A7, BMW 5 Series and Mercedes E / CLS. It will offer four-cylinder engines, but it's most competant version will be fitted with a V6, which will have slightly higher displacement and hybrid versions that should touch 500 hp. The heir to the 164 and 166 standard transmission will be the eight-speed automatic. Expect styling to be sporty, yet elegant with dynamic hood proportions and reduced front overhang. The sporty coupe and spider

Another crucial project for the brand image of Alfa will be the new sports car that will not be as small as the 4C and will not have the V8 of the 8C. With reference to its engines, it should be called 6C. It will be a two-seater four and a half meters long in coupe and spider versions. According to rumors, it should have a metal roof with electric operation. With size, placement and performance well above the Fiat 124 Spider, which is derived from the Mazda MX-5, the 6C does not have this limitation which allows the designers more freedom on its overall form and styling. Naturally, the highlight will be the Quadrifoglio Verde version characterized, as in the case of the Giulia, by the vents on the hood crossed by deep veins that unfold down to the Scudetto (badge grille). The last new model in the Alfa Romeo product plan for 2020 will be the all-new Giulietta. Its main attraction will be a switch to rear-wheel drive. Such a move is in stark contrast to the BMW 1 Series, Audi A3 and Mercedes A Class, all of which are locked into front-wheel drive, transversely mounted engine configurations. For the styling we imagined the future Giulietta to be even more aggressive and compact than the current model, but with less edginess and a more defined contrast between the hood and windshield. Speculation also suggests three-cylinder engines derived from the corresponding four-cylinder petrol and diesel units will also be utilized.