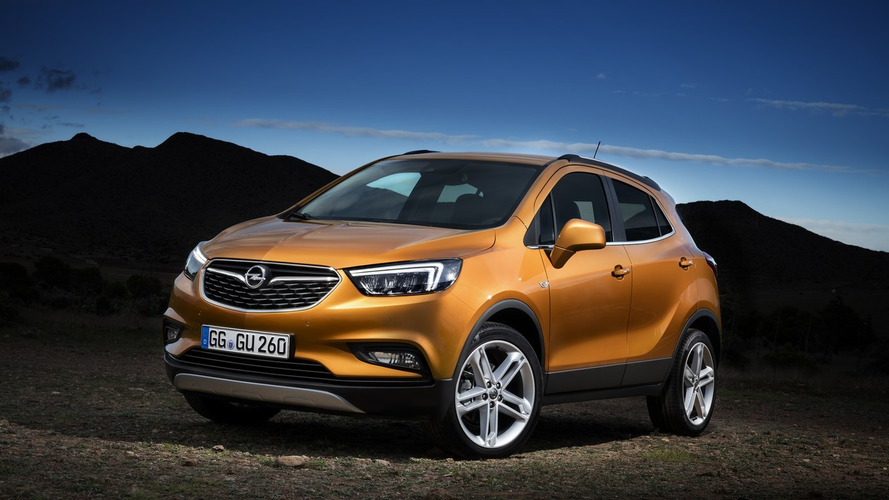 Opel is introducing the Mokka X that will celebrate its premiere next month at the 2016 Geneva Motor Show.

Opel is introducing the Mokka X that will celebrate its premiere next month at the 2016 Geneva Motor Show.

The Rüsselsheim-based marque has been testing the facelifted Mokka for quite some time and now the subcompact crossover is showing its production face. Basically a facelift with an “X” in its name, the high-riding model adopts a sharper body design featuring a horizontal grille shaped like a wing.

At an additional cost, Opel will sell the Mokka with adaptive LED headlights and LED taillights providing the crossover with a more upscale look. New colors like Amber Orange and Absolute Red have been added and there’s also a new set of LED daytime running lights taking the shape of double wings.

On the inside it has gained a revamped dashboard derived from the latest Astra and it comes with a choice of seven- or eight-inch touchscreens. It looks less cluttered now as many of the physical buttons have been eliminated and the respective functions are now integrated in the touch-based infotainment system.

Under the hood, the 2016 Opel Mokka X gains a turbocharged 1.4-liter engine with 152 horsepower (112 kilowatts) sourced from the Astra and working in this application with a six-speed automatic transmission. The engine benefits from start/stop technology and sends power to both axles thanks to an adaptive all-wheel drive arrangement. The gasoline engine will be offered alongside the already available turbodiesel 1.6-liter (aka “whisper diesel”) in two states of tune: 110 hp and 136 hp.

Another novelty is represented by the latest Opel Eye front camera now featuring a higher resolution and better image processing power. Opel has made a series of upgrades to the Traffic Sign Assistant system and you can also get the Mokka X with Following Distance Indication, Forward Collision Alert, and Lane Departure Warning.

The Opel Mokka X will be exhibited early March at the Geneva Motor Show and is programmed to go on sale this fall.