Rolls-Royce Wraith facelift prototypes caught out in the open 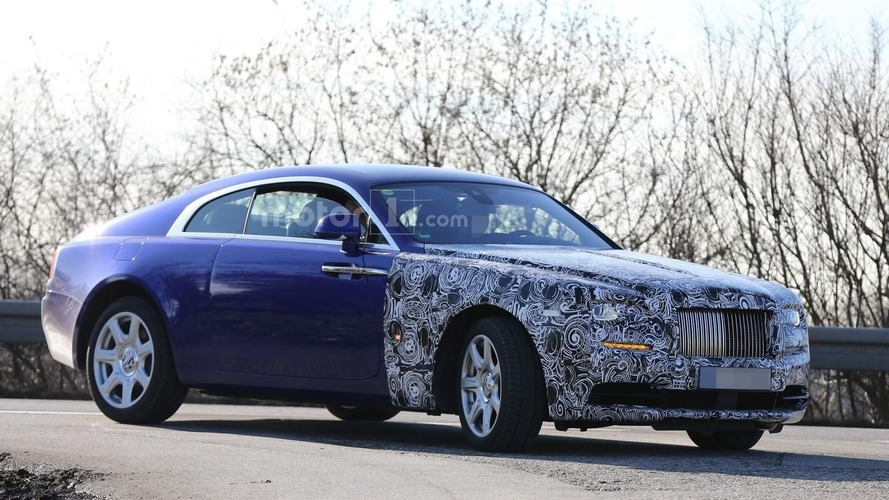 A couple of prototypes of the Rolls-Royce Wraith facelift were spotted recently undergoing testing in Germany, prior to a possible reveal at the Geneva Motor Show this March.

A couple of prototypes of the Rolls-Royce Wraith facelift were spotted recently undergoing testing in Germany, prior to a possible reveal at the Geneva Motor Show this March.

It was only yesterday when our spy photographers saw the 2018 Phantom and now we bring images of the Wraith coupe featuring camouflage only on the front fascia. The styling revisions will likely be very subtle since you can’t really improve upon perfection. Rolls-Royce will still attempt to do that by borrowing some of the design cues seen on the Dawn convertible.

The LED headlights and daytime running lights appear to have a new configuration which will probably have more in common with the Dawn. Rolls-Royce could also be working on the suspension as both prototypes appear to have an increased ride height and the blue car also has some wires sticking out of the back and inside the cabin.

The rear end isn’t hiding behind any disguise because there aren’t any changes at this point. However, the final product could come with a modified bumper and new graphics for the LED taillights.

We know for sure there are going to be some tweaks inside the cabin, because the dashboard of both prototypes was completely covered. Chances are the 10.25-inch infotainment system that debuted in the Dawn will be carried over on the facelifted Wraith coupe.

Don’t hold your breath for any changes in the engine compartment as the biturbo 6.6-liter V12 will likely remain the same. It’s good enough for 624 horsepower and 590 pound-feet (800 Nm) of torque that grants the 5,380-lbs Wraith with a sprint to 62 miles per hour (100 kilometers per hour) in 4.6 seconds.

Rolls-Royce could decide to show the revised coupe as early as the beginning of March during the Geneva Motor Show. If not, the BMW-owned prestige marque will likely wait until the Paris Motor Show set for October.

Gallery: Rolls-Royce Wraith facelift prototypes caught out in the open