Rolls-Royce preparing a facelift for the Wraith 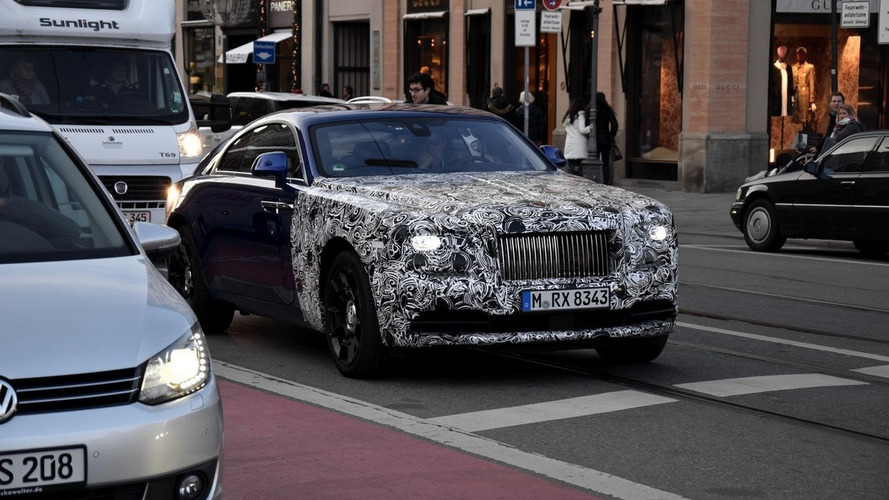 An image coming from Germany reveals Rolls-Royce is working on a facelift for the Wraith and it could be out later this year.

An image coming from Germany reveals Rolls-Royce is working on a facelift for the Wraith and it could be out later this year.

It might seem a little bit too soon for a facelifted Wraith, but remember the model made its debut almost three years ago at the 2013 Geneva Motor Show. As a consequence, it makes sense that Rolls-Royce is working on a mid-cycle refresh which we expect to see in October at the Paris Motor Show.

The prototype spotted by an IndianAutosBlog reader wears a lot of mascara on the front half, but most likely the changes are going to be subtle. Expect to see some revisions to the LED daytime running lights hosted in a reshaped front bumper. There could also be some tweaks to the headlight graphics, a new set of wheels, modified rear bumper, and a different look for the taillights.

As far as the interior is concerned, some of the goodies will likely be taken from the Dawn convertible which comes with a new infotainment system packing a 10.25-inch screen. It will also get the Dawn’s touchpad that according to Rolls-Royce was developed to avoid “unsightly fingerprints at driver and passenger eye level.”

It remains to be seen whether Rolls-Royce will upgrade the biturbo 6.6-liter V12 engine from the current 624 horsepower (632 PS) and 590 pound-feet (800 Nm) of torque. In the current Wraith, the motor is good enough for a sprint to 62 miles per hour (100 kilometers per hour) in 4.6 seconds and an electronically-limited 155 mph (250 kph). These are some impressive figures taking into account the Wraith weighs a hefty 5,380 pounds (2,440 kilograms).

Gallery: Rolls-Royce preparing a facelift for the Wraith