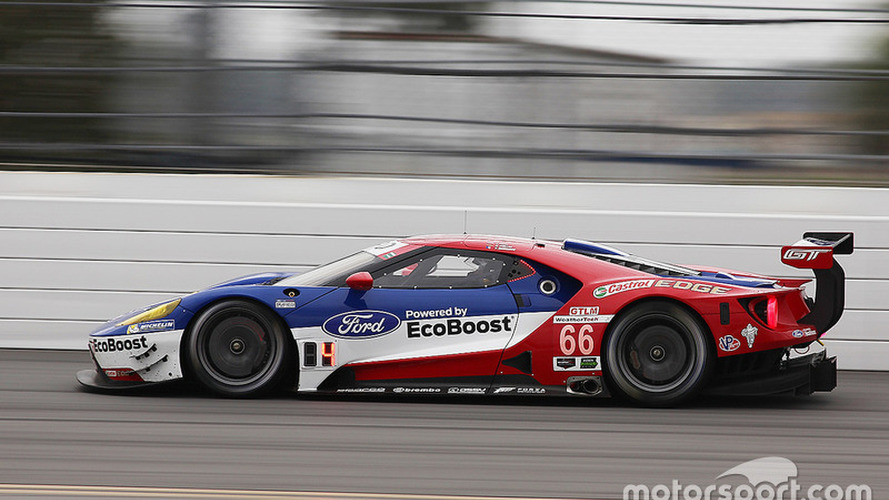 It was 50 years ago that the Ford Motor Company took its first triumph in the biggest sportscar race on the planet – the Le Mans 24 Hours. Is that a burden or motivator for its 2016 comeback?

Ford’s resounding 1966 success against the might of Ferrari has gone down in motorsport folklore, but what tends to be forgotten is that it was a case of third time lucky for the Blue Oval.

After two years of disappointment – Ford failed to get any of its nine factory entries to the finish in 1964 or 1965 – the pressure was on to deliver.

Henry Ford II, the grandson of the company's founder, was even in attendance, the company having circulated a memo at its UK R&D base saying simply: ‘Henry expects you to win…’

Ford duly delivered with a comfortable one-two-three finish as the Ferrari challenge faltered, the first of four wins on the trot before it pulled the plug on its programme at the end of 1969.

Now the iconic American brand is back with an all-new challenger designed to resemble the iconic GT40 of yesteryear – albeit only for GT class honours this time around.

And while its forerunner took three attempts to get it right, Ford only has one shot at replicating that famous 1966 Le Mans triumph on the 50th anniversary this time around.

“We have the heritage not only of that victory at Le Mans 50 years ago, but also the Ford family,” Dave Pericak, global director of Ford Performance, told Motorsport.com.

“As far as I’m concerned, we work for a family, not a company, and to go and win Le Mans for the Ford family would be awesome. So the pressure is on!”

In order to do just that, Ford has teamed up with Chip Ganassi Racing – no stranger to success in US sportscar racing – with twin programmes planned in both the World Endurance Championship and the IMSA WeatherTech SportsCar championship.

And Ganassi himself is just as aware as anybody of the legacy his outfit will be looking to continue.

“That period in the '60s was a landmark time for the Ford Motor Company and for motorsport in general,” he told Motorsport.com. “For an American company to go win Le Mans was unheard of.

“You don’t even have to know anything about racing back in the day to know what a Ford GT40 was.

“This effort is what motorsport is all about – passion and technology. When I was growing up, that’s what racing was all about, not some dumbed down formula with spec cars.”

The new Ford GT racer was on display during the team’s launch of its WEC driver line-up at its UK base at Greatworth Park earlier in the month – and if its performance on-track is as good as its looks, it’s a sure-fire winner.

“The car looks like a piece of art,” said ex-Nissan driver Olivier Pla, one of the four men selected by Ford to pilot the GT in the full WEC season.

“We see these cars from history at Le Mans, and to be able to come back with this manufacturer is something special. As soon as I saw the car I wanted to be involved in the programme.”

Stefan Mucke, who joins the team from Aston Martin, echoed Pla’s sentiment: “When I first heard about the project, I knew I wanted to be part of it.

“I saw the opportunity when the car was presented at Le Mans last year. It looks like a proper race car, and I wanted to be part of the Ford brand's history.”

Before tackling Le Mans, however, there’s the small matter of another legendary endurance race for Ford to take on in the form of the Daytona 24 Hours at the end of January.

It will be the GT’s first competitive outing, and the opposition ranged against Ford is stiff, with old rivals Ferrari also having an all-new car, the 488, making its race debut.

“Daytona is going to be tough,” admitted Pericak. “With a brand new car, just to get through the 24 hours without any hiccoughs and run at the front of the pack would be fantastic.

“To take the chequered flag first would be the icing on the cake.”

Winning first time out is a tough ask for any new car, but with a comprehensive testing programme planned between now and June, the team should arrive well prepared by the time Le Mans rolls around.

“It’s a brand-new car, so we’ll have to see how it goes, but victory is always the objective,” said team principal George Howard-Chappell. “It’s a fairly big ask to do well at Daytona, when it’s our first race and the car is still very young.

“But by Silverstone, we’ll have two long races under our belts and some more testing, so we should be in good shape. We also have plans to test on both sides of the Atlantic, with a strong focus on preparing for Le Mans.”

Only when the Le Mans 24 Hours commences will we discover whether Ford can pick up where it left off all those years ago.

It certainly won’t be easy – but, to quote Ganassi: “If it was easy, anyone could do it and there wouldn’t be any satisfaction in accomplishing it.”