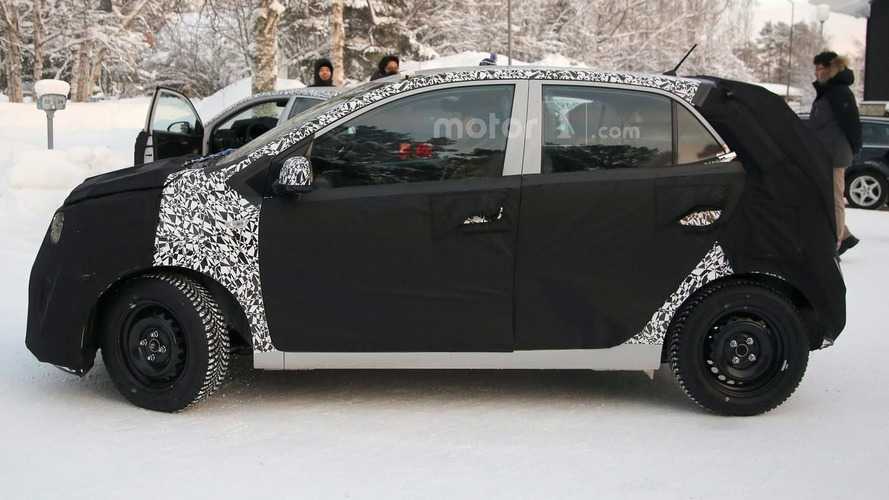 Earlier today we saw the all-new Kia Rio testing in winter clothes and now time has come to check out the next-gen Picanto city car.

Earlier today we saw the all-new Kia Rio testing in winter clothes and now time has come to check out the next-gen Picanto city car.

Kia facelifted its smallest car at the beginning of last year and it seems work is already well underway on a replacement. The prototype was spotted in Sweden and as you would expect it was wearing an extensive amount of disguise to hide what seems to be a substantially different design. The car appears to be bigger than the outgoing model and the size difference is more obvious at the back. This will likely boost the trunk's capacity and rear legroom, as demonstrated in some of the attached spy imagery.

The front fascia is heavily masked, but even so it’s easy to notice the Picanto has LED daytime running lights housed within the radically different headlight clusters. Kia has installed light-emitting diodes at the back in the taillights which don’t seem to be shaped like a boomerang anymore.

Stepping inside the cabin, right away we observe the new design of the steering wheel wrapped in leather. The speedometer now sits on the right side of the instrument cluster while on the outgoing model it’s positioned in the middle. The vents have been relocated and reshaped and there are modified buttons and knobs, along with two cup holders in front of the gear knob. Speaking of which, you’ll notice one of the prototypes spotted by our spy photographers had a manual gearbox, while the other was equipped with an automatic.

Technical specifications are not available at this point, but we expect the 2017 Kia Picanto to use just about the same internals as sister car Hyundai i10.

It’s too early to say when Kia will reveal it's overhauled city car, but it’s highly unlikely we’ll see it in Geneva in March. A more plausible introduction seems to be the Paris Motor Show set for October prior to a late 2016 / early 2017 market launch.