The Audi R8 serves as the brand's supercar, but the automaker offers a slew of other high-performance models. The RS3 and RS Q8 roll off the assembly line with potent powertrains hiding under the hood, but the two competing against the R8 V10 Performance Spyder in the latest Carwow YouTube video aren't stock. This helps level the playing field between the three as they drag race each other.

The RS3 packs a turbocharged 2.5-liter five-cylinder engine that makes 550 horsepower (410 kilowatts) and 538 pound-feet (730 Newton-meters) of torque after the tune. It has a seven-speed dual-clutch gearbox and all-wheel drive. The upgrades to the RS Q8's twin-turbo 4.0-liter V8 crank up the SUV's output to 710 hp (529 kW) and an estimated 663 lb-ft (900 Nm) of torque. Power routes to all four wheels through an eight-speed gearbox.

The R8 V10 Spyder sits between its competitors with its naturally aspirated 5.2-liter V8 engine under the hood, producing 620 hp (462 kW) and 427 lb-ft (580 Nm) of torque. It has all-wheel drive with a seven-speed DCT between the engine and the wheels.

While the RS3 and RS Q8 make a lot of power, it's not enough to beat the R8 in either of the drag races. The Spyder is just quicker, completing the quarter mile in 11.1 seconds. The RS3 finished it in 11.5 seconds, but the larger RS Q8 SUV wasn't that far behind. It needed just 11.7 seconds to finish the race.

The first rolling race, with the cars set in their comfiest settings, ends with the same results as the two standing drag races. The R8 crosses first with the RS3 and RS Q8 right behind it. However, the second rolling race puts the trio into their sportiest settings, and this is where the R8 falters. It struggles to accelerate like the other two, finishing in second place behind the RS3.

The heavier RS Q8 fails to win the brake test, but the RS3 and R8 were too close to determine a winner. While the tuned RS3 and RS Q8 couldn't dethrone the R8 as the top-tier Audi performance car, they were worryingly close. 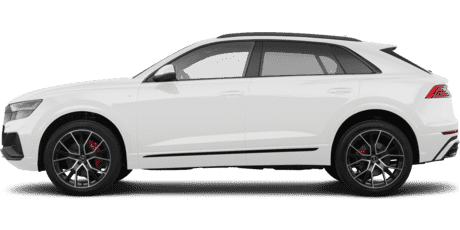