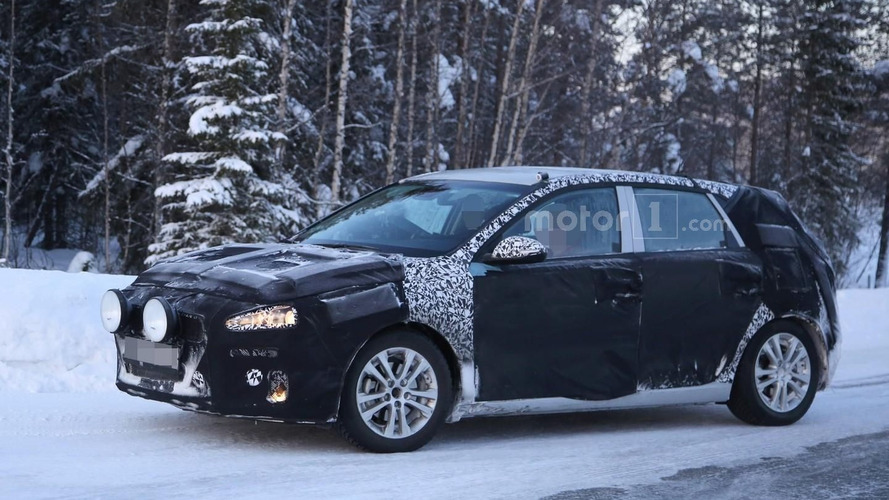 Hyundai is hard at work testing the third generation of its i30 compact hatchback likely to be unveiled later this year.

Hyundai is hard at work testing the third generation of its i30 compact hatchback likely to be unveiled later this year.

Over a year ago, Hyundai came out with a mid-cycle facelift for the second-generation i30 and now the company is making progress with its replacement seen here wearing the production body. The heavily camouflaged prototype was spotted at the Arctic Circle together with the Kia Optima Sportswagon while undergoing testing at -22 degrees Fahrenheit (-30 degrees Celsius).

The new i30 was also caught on camera together with segment rivals such as the Ford Focus and VW Golf. As you probably know, benchmarking is very important during development and in this case Hyundai wants the new i30 to be a more worthy adversary for those two top names in the compact segment.

Getting back to the prototype at hand, the massive camouflage doesn’t reveal a great deal and we don’t know for sure if the car is bigger than the current model. What we do notice is the redesigned front fascia is taking inspiration from the recently introduced Genesis G90. It seems to have a significantly wider front grille and sleeker headlights, while the rear end shows less curvy taillights featuring a sharper design.

The engine lineup will likely kick off with a turbocharged 1.0-liter three-cylinder like the one available in the facelifted Kia cee’d. The naturally-aspirated 1.4- and 1.6-liter motors could be dropped altogether, while the turbocharged 1.6-liter gasoline and diesel units are expected to be carried over.

There’s also going to be a new flagship i30 N sitting above the existing i30 Turbo, but we still don’t know what will power it. However, some say it will be a turbo 2.0-liter from the RM15 concept and it will apparently be linked to an all-wheel drive system. The engine has 300 horsepower and 283 pound-feet (383 newton meters) of torque in the RM15, but that doesn’t necessarily mean it will have the same output in the i30 N.

The third-gen Hyundai i30 will likely debut in October at the Paris Motor Show and it will be interesting to see whether the N version will also be introduced. Sister model Kia cee’d is expected to make the jump to a third generation in the first half of 2017.