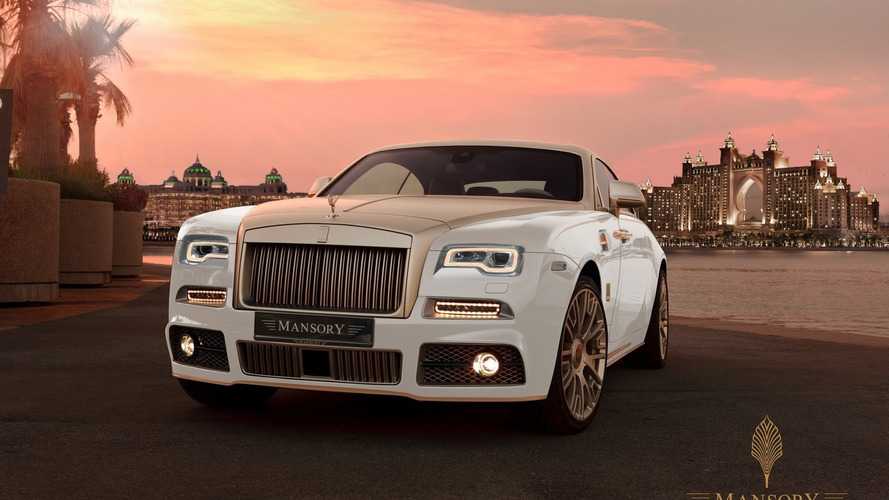 Controversial tuner Mansory has resorted to gold accents to make the Rolls-Royce Wraith stand out even more.

Controversial tuner Mansory has resorted to gold accents to make the Rolls-Royce Wraith stand out even more.

Leave it to Mansory to roll out a flashy aftermarket package for the elegant Wraith that has received a gold treatment on the upper half of the body. It’s known as the “Palm Edition 999” and also includes gold-plated door handles and other similar accents applied onto the side skirts and on the fins of the front fender vents. Those large 22-inch alloys have also been blinged-out and come with Vredestein 265/35 tires.

It’s the same story on the inside where numerous gold bits and pieces are spread throughout the cabin, including on the center console. Mansory tells us all of the original badges were replaced with logos and plaques finished with 24-karat pure gold. At an additional cost, the tuner can apply this look on virtually all of the car’s metallic surfaces. As you probably have guessed, "999" refers to the gold's purity.

To go with the stronger visual impact, the biturbo 6.6-liter V12 engine has been massaged to deliver 730 horsepower (544 kilowatts) and 738-pound feet (1,000 newton meters) of torque. Once the power boost is implemented, the Rolls-Royce Wraith will be able to hit a top speed of 186 miles per hour (300 kilometers per hour). That’s a healthy upgrade over the 632 hp, 590 lb-ft, and 155 mph provided by the standard Wraith.

Pricing details have not been disclosed, but we do know Mansory plans on selling only nine packages.