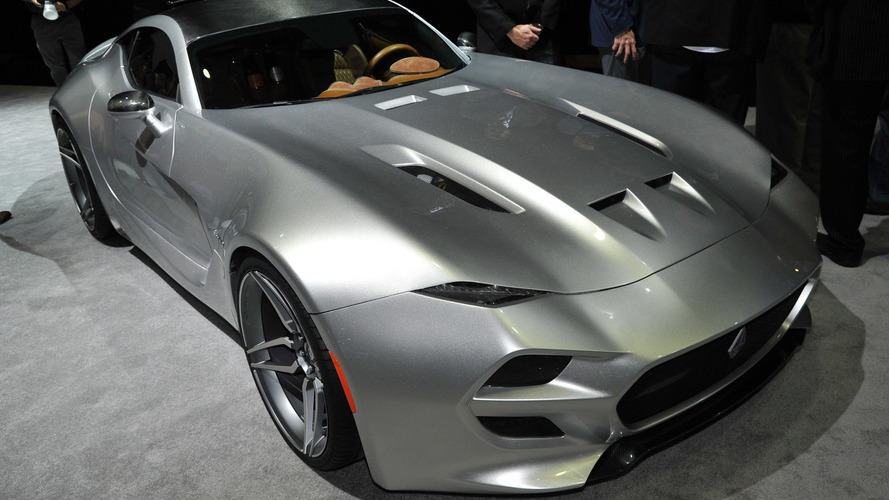 VLF Automotive has staged the world premiere of the “Force 1” today during the Detroit Auto Show.

VLF Automotive has staged the world premiere of the “Force 1” today during the Detroit Auto Show.

Named as if it was Barack Obama’s car, the Force 1 is a Viper-powered supercar with a carbon fiber body that tips the scales at only 3,395 pounds (1,538 kilograms). It’s the result of a joint effort between Henrik Fisker, former General Motors chairman Bob Lutz, and well-known Viper racer Ben Keating.

Even though it looks substantially more aggressive than the Viper, it’s still easy to notice the car’s origins and you will observe the side exhausts are still there. Its heart and soul is the same naturally-aspirated 8.4-liter V10 engine, but in this application it churns 745 horsepower and 638 pound-feet of torque. For the sake of comparison, in the Viper it churns 645 hp and 600 lb-ft.

All that power is channeled to the rear wheels through either a standard six-speed manual gearbox or an optional six-speed automatic with paddles. The Force 1 will come as standard with a Brembo high-performance braking kit stopping those massive 21-inch wheels paired with Pirelli P Zero tires. For reasons beyond our understanding, the car features a champagne saddle mounted between the two seats.

If you are more interested in performance (as you should), VLF Automotive says the supercar will be able to run the sprint to 60 miles per hour in just three seconds before topping out at 218 mph (350 kph).

The Force 1 is scheduled to enter production phase at the end of April in Auburn Hills, Michigan where the Destino will also be assembled. If you are really interested in this, VLF Automotive has slapped a starting price of $268,500 on the Force 1. If you would rather have the Fisker Karma-based Destino, that one kicks off at a more attainable $229,000.

VLF Automotive mentions production will be limited and the first batch will consist of only 50 units available through Ben Keating’s Viper Exchange.

While there has been some controversy about the car looking like an Aston Martin DB10, it really doesn't seem to be the case after seeing the live pics.