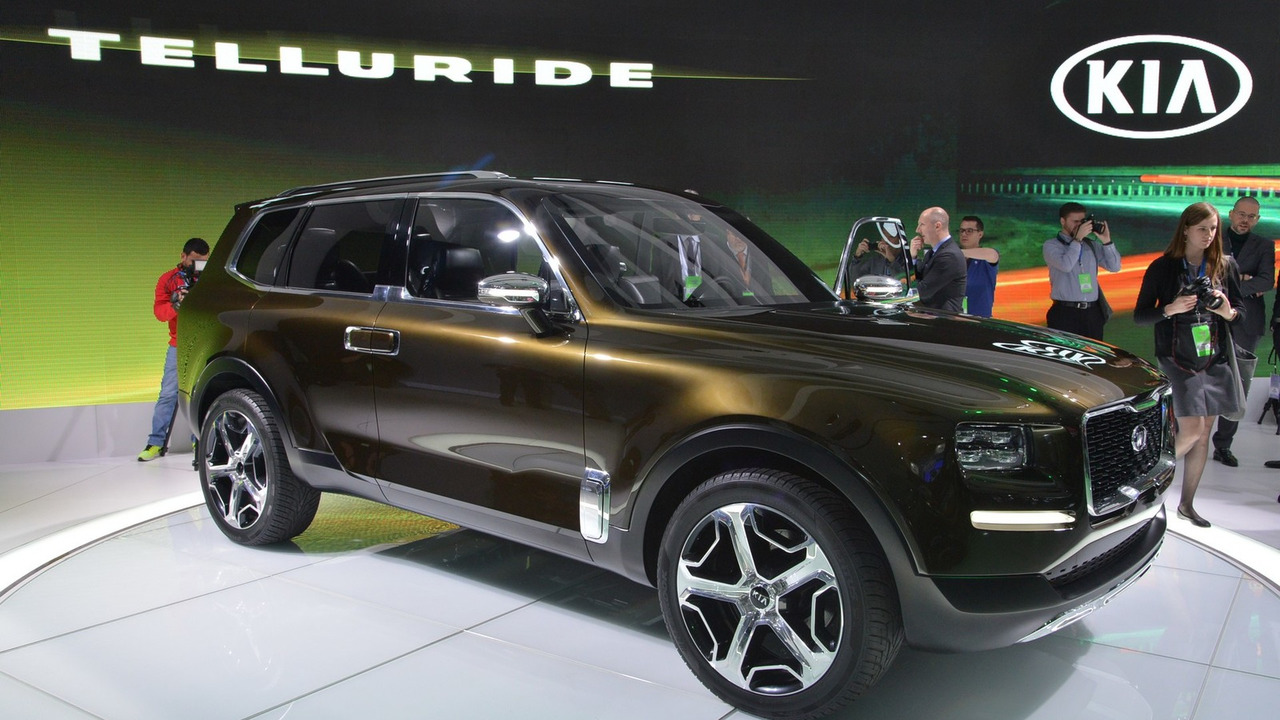 Following a teaser released last week, Kia has taken the wraps off the Telluride concept at the ongoing North American International Auto Show in Detroit.

Following a teaser released last week, Kia has taken the wraps off the Telluride concept at the ongoing North American International Auto Show in Detroit.

The fullsize, seven-seat SUV concept is a taste of what’s to come in terms of a Borrego successor, even though Kia doesn’t actually say a production version is in the works. It’s not exactly what we would call appealing, but in some ways it is interesting thanks to the rear-hinged back doors and the four-point LED headlights. It has very thin vertical taillights that also take advantage of LEDs, and Kia decided to give the concept a dual exhaust setup and a prominent roof-mounted spoiler.

More About The Kia Telluride:

Compared to the Sorento, Kia’s showcar for Detroit is 4.4 inches taller, 4.7 inches wider, and 9.5 inches longer. It’s actually based on the Sorento, but the wheelbase has been stretched by 4.7 inches to a generous 121.3 inches. The increased sized is matched with a set of 22-inch five-spoke wheels wrapped in Hankook Ventus ST 275/45 R22 tires.

Motivation is provided by a plug-in hybrid system consisting of a naturally aspirated 3.5-liter V6 engine with 270 horsepower working with a 130 hp electric motor. This configuration generates a combined 400 hp sent to an all-wheel drive system. Despite the car’s large footprint, Kia mentions the Telluride concept will return more than 30 miles per gallon on the highway.

On the inside there are four captain’s seats and a folding third-row bench. Passengers sitting on the middle row can recline the seats almost flat and also benefit from fold-away footrests for utmost comfort. Those four seats on the first and second rows incorporate sensors that monitor the passenger’s vital health information. The data gathered is then showed on the door panel screens synchronized with a so-called Light Emitted Rejuvenation system. LER consists of a wing-shaped LED panel located under the sunroof that displays a therapeutic light to cure jetlag and increase the energy levels of the passengers.

There’s also a nifty touch-sensitive thin interactive band placed on the second row center console to allow passengers manage the infotainment system’s media. It’s done by simply swiping the hand to change the song and play it on the seven-speaker Harman Kardon audio system or portable headphones. Lastly, wireless charging is available in the compartment mounted in the center stack, so you won't have to bother with cables.

Although Kia mentions there aren’t plans to make the Telluride, the company reminds us it has a history of launching production models that are heavily influenced by preceding concepts.