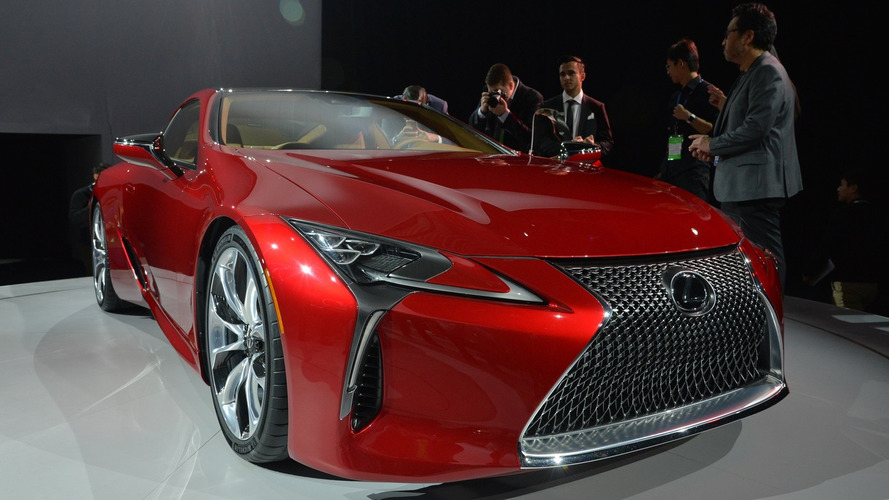 The Lexus LF-LC Concept has finally transformed into a production model, as the LC 500 has debuted at the 2016 Detroit Auto Show.

The Lexus LF-LC Concept has finally transformed into a production model, as the LC 500 has debuted at the 2016 Detroit Auto Show.

The good surprises today are continuing as we have official photos and technical details regarding Lexus’ LC 500 flagship sports coupe. It took the automaker four years to develop the production model and finally it is here, making “the strongest statement yet about the brand's future product direction.”

Starting with the design, we are happy to see the coupe is sharing most of its key design elements and its proportions with the concept that inspired it. The front end is dominated by a massive radiator grille, bordered by chrome on three sides and a new 3D mesh design. The grille is surrounded by sleek triple LED headlights, integrating L-shaped daytime running lights.

You probably won’t be amazed by the interior as it feels like something we’ve already seen, but it’s interesting to understand the driver’s position was engineered to be as close as possible to the vehicle’s center of gravity, where feedback from the car is “the most communicative to the driver.” The seats are covered with Alcantara leather, while the door panels, center console, and dash pad structures feature elements of Lexus’ Takumi craftsmanship in their finish.

The LC 500 is the first Lexus to use the brand’s all-new “premium rear-wheel-drive luxury platform” that is part of the new corporate global architecture for luxury vehicles (GA-L). Engineers of the brand have worked mainly on placing most of the mass, including the engine and the occupants, in a position more centralized and lower to the ground. The sporty coupe also rides on run-flat tires to reduce weight thanks to the lack of a spare wheel, while the 12-volt battery has been relocated to the trunk in search of a better weight distribution.

Last but not least, the sexy machine has a 5.0-liter V8 engine that is also found in the RC F and GS F. The 32-valve naturally aspirated unit generates 467 horsepower and 389 pound-feet of torque, channeled through a new 10-speed automatic gearbox to the rear wheels. This strong setup ensures the car can accelerate from a standstill to 60 miles per hour (98 kilometers per hour) in less than 4.5 seconds.

Detailing the new transmission, Lexus explains it’s rivaling the shift times of a dual-clutch transmission and is smaller and lighter than some current eight-speed transmissions. The gearbox is matched to an electric control system with software that helps anticipate the driver’s inputs by monitoring acceleration, braking and lateral g-forces.