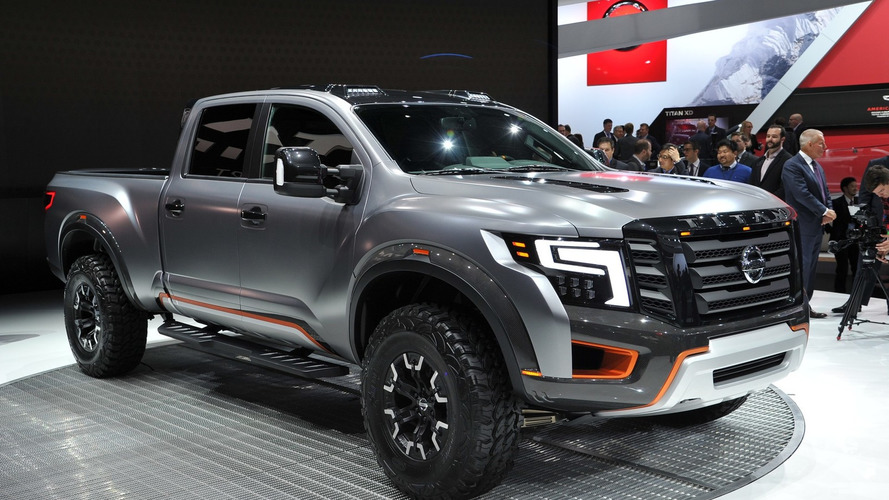 We are live from the Detroit Auto Show where Nissan has staged the world premiere of the aggressive 2016 Titan Warrior Concept.

We are live from the Detroit Auto Show where Nissan has staged the world premiere of the aggressive 2016 Titan Warrior concept.

If you are afraid of the apocalypse, Nissan has just the right tool to increase your chances of coming out alive. It’s the Titan Warrior concept based on the 2016 Titan XD and proposes a hypothetical extreme pickup truck with a “Modern Armor” exterior.

It wears a substantially beefier body widened on each side by three inches (7.6 centimeters). It also had to be raised by almost three inches to make room for those large off-road 37-inch tires paired with 18-inch alloys featuring a machined aluminum surface.

The conceptual Titan XD has received a matte-gunmetal “Thunder” paint with “Magna” orange and black accents. Bespoke LED headlights provide a more menacing appearance and the same light-emitting diodes are found in the custom taillights that we wouldn’t mind seeing on the production Titan. The quad exhaust tips and side sill protectors denote the Warrior means business and there are also front & rear aluminum skid plates to enhance the rugged appearance.

The interior cabin was designed to be indestructible and Nissan says it wanted to give the look and feel of a chronograph. Designers used a variety of materials like carbon fiber, leather, and polished chrome which contribute to make the Titan Warrior distance itself further from the production model.

Power comes from the same turbodiesel 5.0-liter V8 Cummins engine generating 310 horsepower and 555 pound-feet of torque sent to the road through a heavy-duty six-speed automatic gearbox.

It looks very exciting no doubt, but Nissan hasn’t said a word about coming out with a more extreme Titan XD.