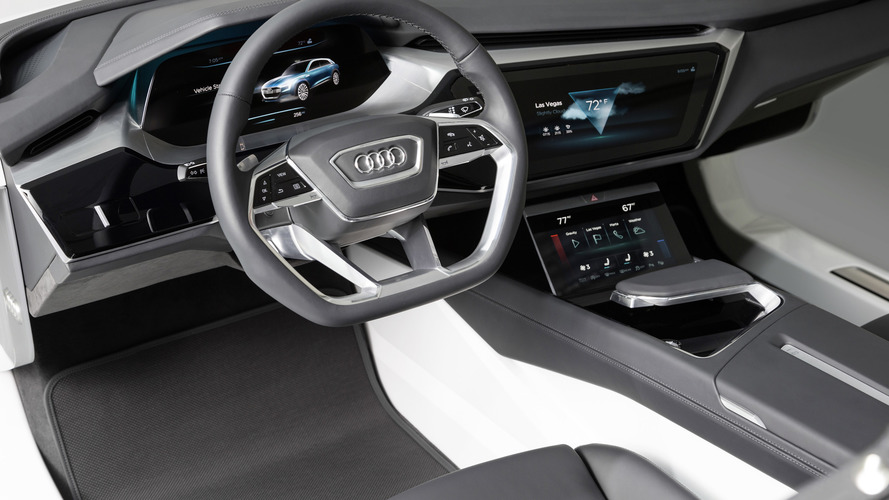 Audi has showcased its latest interior solutions at the 2016 Consumer Electrics Show in Las Vegas.

Audi has showcased its latest interior solutions at the 2016 Consumer Electronics Show in Las Vegas.

The innovations start with the latest version of the company’s virtual gauge cluster that first debuted two years ago at the same show. Now the screen is 14.1-inches long in diagonal and features AMOLED (Active Matrix Organic Light Emitting Diodes) technology.

The dashboard integrates two displays for the MMI infotainment system, where the selected functions are activated by “gentle yet defined pressure on the display.” The lower display operates the climate control and the upper screen controls the navigation and audio systems.

Behind the new operating and display concept is the latest generation of the Audi Modular Infotainment Platform, MIB2+. It features the latest mobile communications standard LTE Advanced that can download data into the car at a maximum speed of 300 Mbit per second. The technology also enables mobile telephony using the VoLTE (Voice over LTE) method, which “shortens the time needed to make a phone connection and increases voice quality.”

Audi also announced it will soon start offering new services in Europe, including emergency call that alerts the Audi Emergency Call Centre after an accident, and online roadside assistance that calls the Audi Service Centre and Audi service request with which customers can schedule a service appointment. Also, in a few months, the new A4 and Q7 will be getting the Audi connect SIM - a permanently installed embedded SIM (e-SIM) that automatically brings Audi connect services into the car across Europe.

Next on the list is the Audi Fit Driver that "is focusing on the well-being of the driver." The system is analysing different data such as heart rate and skin temperature and is deducing whether the driver is stressed or overly tired. Then, the vehicle systems adjust their modes of operation to "relax, vitalise, or even protect the driver."

The brand with the four rings is also displaying the e-tron Quattro concept powered by an electric system that consists of three electric motors for a total output of 503 horsepower, sent to all four wheels. The concept has a range of 311 miles with a single charge of the batteries, located in the floor between the axles.

The study has semi-autonomous functions, which will be launched into a production model “in the near future,” according to the company. The system uses a central driver assistance controller, transforming the information gathered from the car’s sensors, 3D cameras, laser scanner and radar, and ultrasonic sensors into automated piloted driving in traffic jams and piloted parking.

Last but not least, Audi is also presenting OLED (Organic LED) technology for the exterior lighting, specifically for brake lights and turn signals.