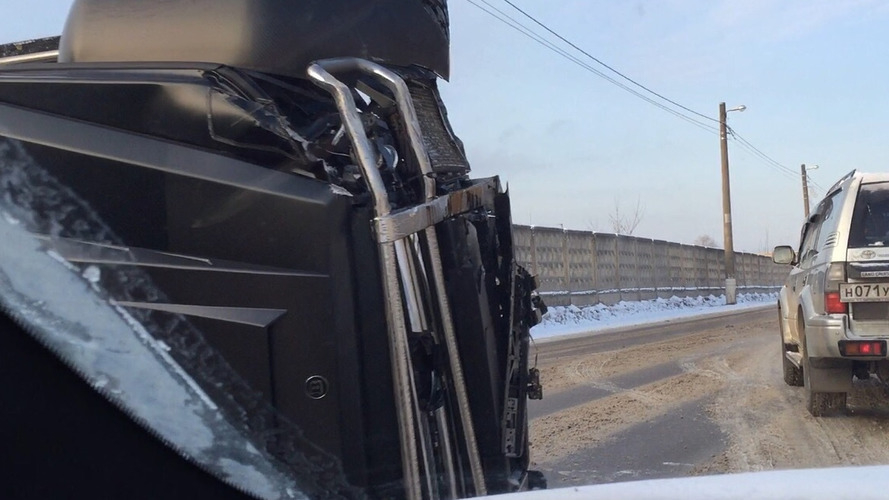 It’s not every day that you see a six-wheeled, 8,487-pound behemoth tipped over, but somehow the driver of this Brabus-prepared G63 AMG 6x6 managed to crash it. The accident took place recently in Moscow and at the moment it’s not known what actually happened. One can assume the driver swerved to avoid the car in front of him, but due to excessive speed and a slippery road, it ultimately landed on one side.

It’s hard to say whether the damages are extensive, although from what we can see only the body will need some TLC, so the rare and ostentatious vehicle will likely get back in shape in no time. There aren’t a lot of these on the roads taking into account Mercedes made just over 100 units and most likely Brabus worked its magic only on a handful of cars.

This tuned version packs a mighty 700 horsepower punch from an upgraded biturbo 5.5-liter V8 engine generating a maximum torque of 708 pound-feet (960 newton meters). Despite its massive weight, the Brabus G63 AMG 6x6 can run the 0-62 miles per hour (0-100 kilometers per hour) run in 7.4 seconds and will top out at an electronically-restricted 100 mph (160 kph).

Mercedes has ceased production of the model and replaced it with the G500 4x4², basically a four-wheel version with less power.