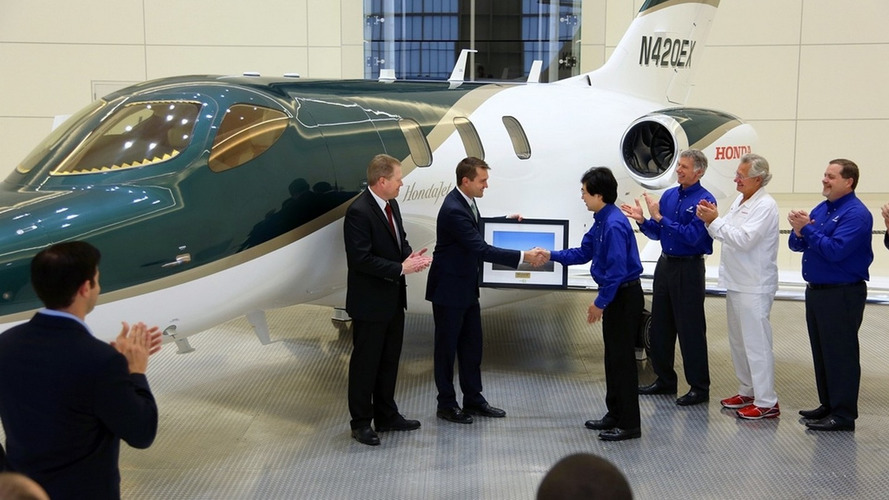 Honda's high flying ambition to enter world of aviation is finally taking flight as the company has delivered the first HondaJet.

Honda's high flying ambition to enter world of aviation is finally taking flight as the company has delivered the first HondaJet.

Dressed in a tri-color livery, the first model marks a major milestone in the plane's development and comes less than a month after the HondaJet received its final certification from the Federal Aviation Administration.

Honda didn't have much to say about the first jet but noted all HondaJets feature a unique "Over-The-Wing" engine mount that helps them have a spacious cabin and the highest cruising speed in its class.  Speaking of the latter, the HondaJet can travel at 420 knots true airspeed (KTAS) at 30,000 feet.

The HondaJet is available in two configurations and can accommodate up to six passengers.   The plane also has a private lavatory and an optional package which enables owners to control the audio system, lighting, cabin temperature, and electrochromatic window shades from a mobile device.

In a statement, Honda Aircraft Company President and CEO Michimasa Fujino said "We are very excited to commence deliveries of the HondaJet, fulfilling Honda's commitment to advancing human mobility through innovation. Honda Aircraft has now extended this commitment skyward with the delivery of our first aircraft, and I hope we soon will begin to see many HondaJets at airports around the world."