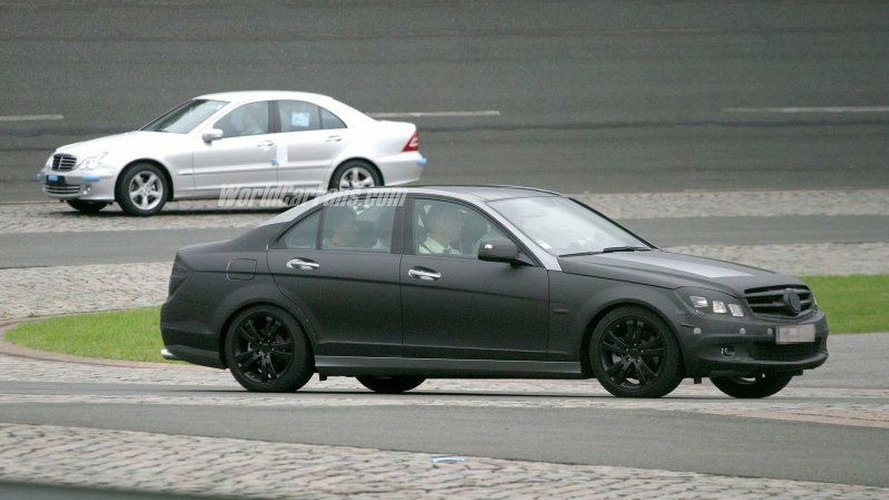 Seen here for the first time testing alongside the current model is the new 2008 Mercedes-Benz C-Class - and it's wearing a thin disguising only.

Can you spot the difference?

Seen here for the first time testing alongside the current model is the new 2008 Mercedes-Benz C-Class – and it’s wearing a thin disguising only.

Expect official unveiling at Geneva 2007 with sales starting shortly after. Also expect the wagon to arrive six months later, in the autumn of next year. Our sources state a cabriolet soft-top and coupe are also planned which we can only interpret as being the new CLK-Class which is also based on the same platform.

Although it will share more of its components than before with the larger E-Class, the next C will be much sharper to drive and more distinctive as a range in its own right: Mercedes-Benz is to position it as a true small sports saloon, rather than simply a smaller answer to the E.

Air suspension or active body control have been ruled out due to cost restraints. Base engine will be a direct injection 4-cylinder 1.8-litre with varying horsepower from 150 to 190. Horsepower for the 2.5- and 3.5-litre V6 will be 210 to 270 respectively. AMG's 5.4-litre will be revised with new horsepower rating up from today's 360 to 400-410bhp to compete with the Audi RS4 and future BMW M3. Also a 3.0-litre diesel is planned as well as the new iDrive-like operating concept found in the new S-Class. 4MATIC all-wheel-drive system will also remain available as well.