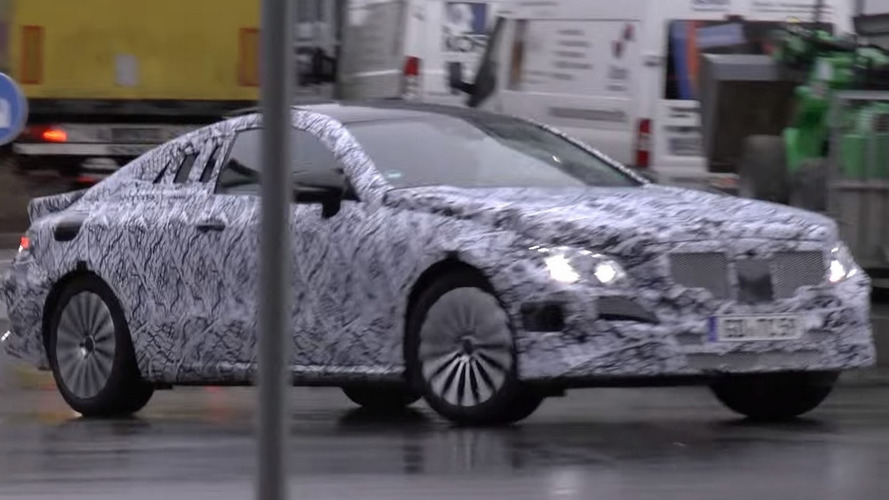 The next-generation Mercedes E-Class Coupe has been caught on camera prior to a market launch set for 2017.

The next-generation Mercedes E-Class Coupe has been caught on camera prior to a market launch set for 2017.

More than two weeks ago we shared the first batch of spy images with the next E-Class Coupe (C238) and now we have stumbled upon the very first footage. The car is dressed in heavy camo, but nevertheless it’s easy to notice it will have very much in common with its smaller brother, the C-Class Coupe. While the outgoing model has the side mirrors mounted on the A pillars, the new E will come with door-mounted mirrors. This is exactly what happened to the C-Class Coupe when it received a new generation.

It will ride on the MRA platform that will come with a weight loss despite an increase in size granting a more spacious cabin and a larger trunk. The interior will largely be sourced from the E-Class Sedan (W213), so expect a dual digital screen layout in the same vein as the S-Class models. The sedan will also be offered with analog dials, but chances are Mercedes will offer the sleeker coupe only with the digital setup.

A couple of new turbocharged four-cylinder gasoline and diesel engines will likely be offered, as well as stronger inline-six motors. Mercedes admitted last year it was a mistake not to launch a fully-fledged AMG versions of the outgoing E-Class Coupe and Convertible, but promised the new ones will receive the treatment. These models will come with a beefier iteration of the biturbo 4.0-liter V8 engine that is estimated to produce 550 hp in the standard model and 580 hp in the S version.

Taking into account the E-Class Sedan will premiere on January 11 at NAIAS in Detroit, the coupe will likely go official in the first half of 2017. Before rolling out the coupe, Mercedes will introduce the E-Class Estate (T-Modell) likely in the second half of 2016. There’s also going to be a new convertible set to arrive after the coupe, along with a long wheelbase model that could become part of the Mercedes-Maybach family. In addition, we’ve heard rumors about a rugged E-Class Estate with a jacked up suspension to rival the Audi A6 allroad.