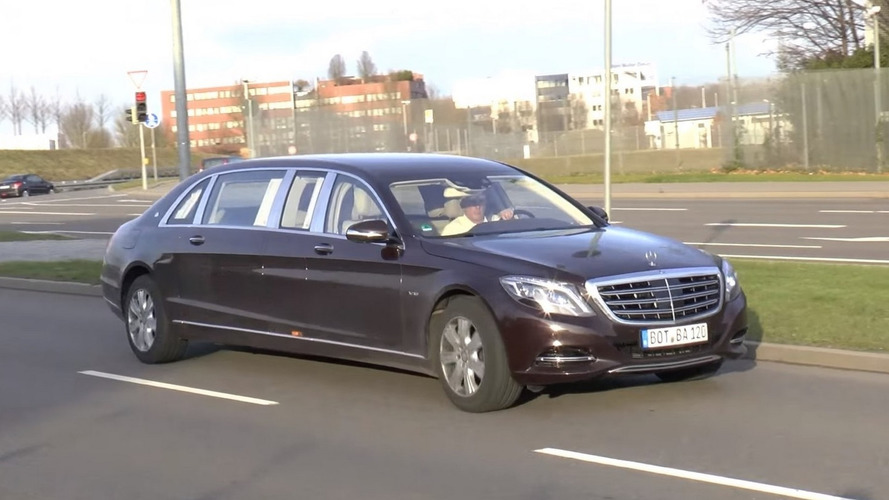 The exceptionally elegant Mercedes-Maybach S600 Pullman has been spotted briefly on the streets of Sindelfingen in Germany.

The exceptionally elegant Mercedes-Maybach S600 Pullman has been spotted briefly on the streets of Sindelfingen in Germany.

Earlier this year, Daimler brought back the “Pullman” moniker for the most expensive version of the current S-Class generation. It’s actually built by Brabus and as you can see it clearly stands out due to its massive length of 255.8 inches (6499 mm). The distance between the axles measures a whopping 173.9 inches (4418 mm) to enable the most lavish cabin ever created by Mercedes.

Naturally, the Pullman is offered in the S600 guise with the mighty twin-turbo 6.0-liter V12 engine delivering 523 hp and 612 lb-ft of torque.

Despite being shown in Geneva back in March, deliveries of the Pullman haven’t actually started yet as high-end customers will have to patiently wait until the start of next year. We don’t have an exact price tag, but Daimler said it will start at somewhere in the region of $543,300 (€500,000) for the base version. An armored version is being offered as well, but we’re afraid to even think about how much it costs.

Mercedes hasn’t specified whether the Pullman will hit stateside in the foreseeable future, but we do know the main focus will be on countries such as Russia and China.