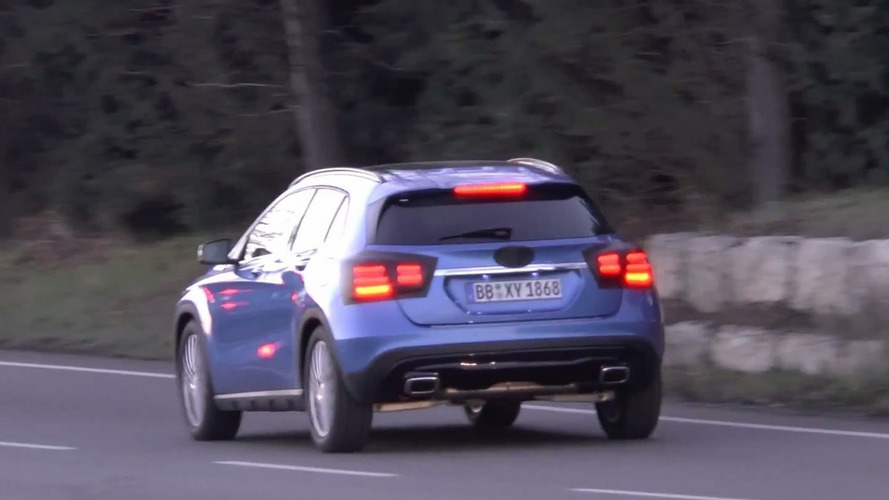 Spy video shows Mercedes-Benz has initiated testing of a lightly facelifted GLA due to come out in 2016.

Spy video shows Mercedes-Benz has initiated testing of a lightly facelifted GLA due to come out in 2016.

Calling this a facelift is a bit of a stretch, because as you can see the tweaks have been kept down to a minimum. As a matter of fact, this prototype only has camouflage on and near the lighting clusters, while the rest of the car is pretty much undisguised. The production version could also come with some changes to the bumpers, but nothing of great importance.

The GLA will basically receive just about the same cosmetic revisions as the A-Class facelift revealed a few months ago. It’s the same story with the CLA and CLA Shooting Brake that have already been spotted with barely any makeup.

Don’t hold your breath for any important mechanical changes as most of the hardware modifications implemented in the A-Class facelift are already available on the other three members of the A-Class family. One of the biggest changes for the GLA, CLA, CLA Shooting Brake will be the switch from optional bi-xenon to full LED headlights, hence the black tape on the headlights.

Although we don’t get to see the interior in the attached spy video, we know for sure the GLA facelift will get an updated 8-inch infotainment system with support for Android Auto and Apple CarPlay. Moreover, Mercedes-Benz will install galvanized switches and will also make some subtle changes to the instrument cluster.

Expect to see the GLA facelift go official in the first half of next year.