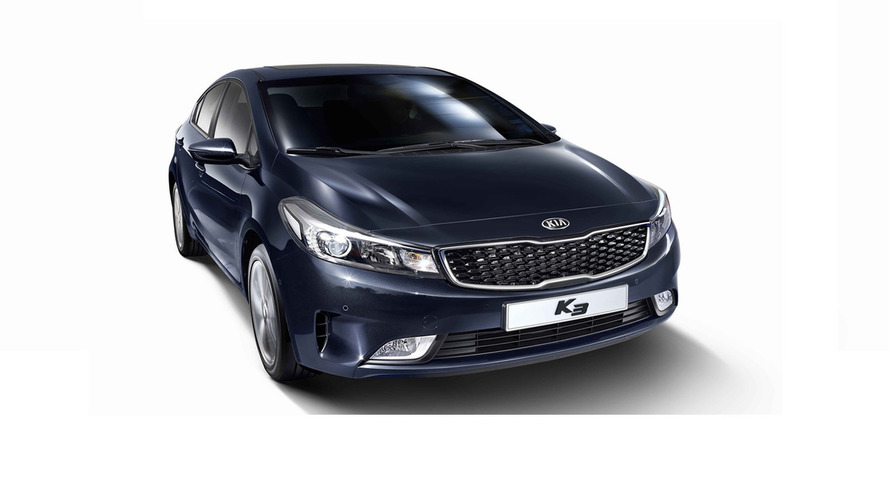 Kia South Korea has published a full image gallery with the facelifted K3 sold in other markets with the Forte Sedan and Cerato monikers.

Kia South Korea has published a full image gallery with the facelifted K3 sold in other markets with the Forte Sedan and Cerato monikers.

It was only a couple of days ago when the facelifted K3 KDM Spec was spotted without any disguise at home in South Korea and now Kia has revealed the compact sedan. The headlights were already big on the pre-facelift model, but now Kia has decided to stretch the HID clusters (with LED DRLs) even further. In addition, the front bumper has been redesigned and the fog lights were repositioned to make room for the vertical vents.

The side profile has remained virtually the same, while the rear end hosts reshaped taillights with revised graphics and LEDs. The rear bumper appears to be slightly resculpted, but nothing to write home about.

There’s not much going on inside the cabin, but we do notice there are less buttons for the infotainment system and a new steering wheel with glossy black accents. In addition, there seem to be extra buttons on the central tunnel near the gearbox shifter.

Our Korean language is a bit rusty, but we did manage to find out the 1.6-liter GDI naturally aspirated gasoline unit will be carried over with 132 PS and a six-speed automatic. The K3 facelift will also be available with a more economical 1.6 VGT diesel with 128 PS.

Now that the K3 KDM Spec is out and about, expect the equivalent Kia Forte Sedan US Spec to be unveiled in January at the Detroit Auto Show.