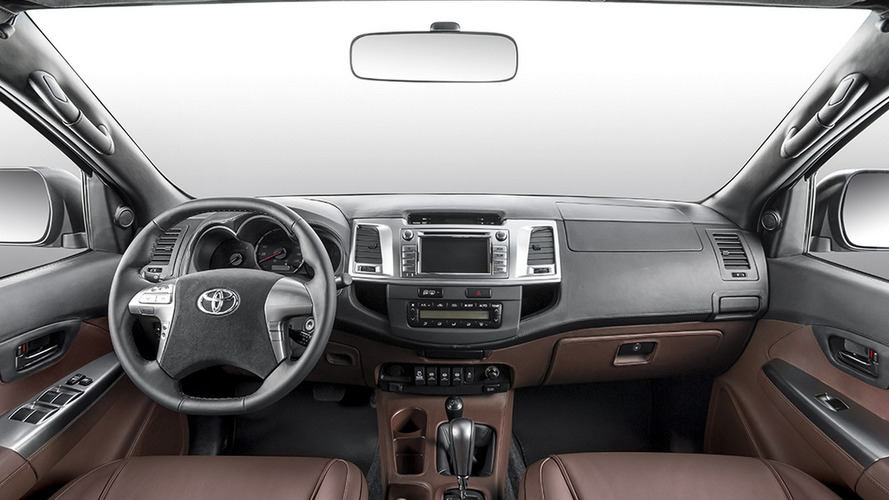 Overdrive has sent us several images and details concerning their latest project based on a custom Toyota Hilux with three axles.

Overdrive has sent us several images and details concerning their latest project based on a custom Toyota Hilux with three axles.

Think of it as the poor man’s Mercedes-Benz G63 AMG 6x6 as converting a Toyota Hilux into a six-wheeler is a lot more affordable than the €456,900 asking price for the three-axle 2015MY G63. In charge of the ambitious project were the Bulgarian engineers from Vromos who are specialized in modifying a variety of vehicles destined for off-road adventures.

This particular Hilux also has a variety of changes inside the cabin. After Vromos completed the exterior, the vehicle’s interior cabin was then pampered by Overdrive. If the name sounds familiar, that’s because the aftermarket specialists were responsible for refreshing a 1971 Mercedes-Benz 280SL and a Jaguar XJ220 back in 2013.

Getting back to the Hilux at hand, it no longer has the standard front seats as these have been replaced by a set of electric seats sourced from the Land Cruiser. Almost all of the visible areas inside are wrapped in a combination of leather and Alcantara, including the door panels, center console, and the dashboard. There’s also a revised steering wheel with a more ergonomic design and an Alcantara treatment for the headliner.