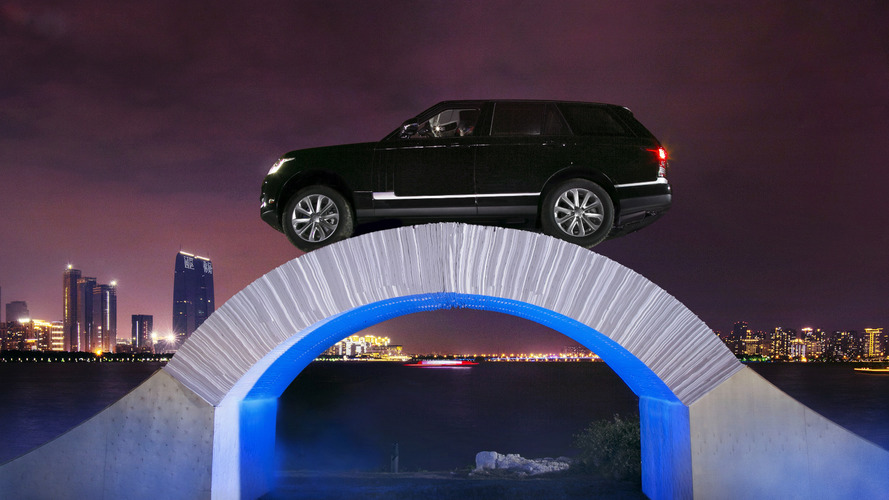 Land Rover has celebrated the Range Rover's 45th anniversary by driving the model across a specially-built paper bridge in Suzhou, China.

Land Rover has celebrated the Range Rover's 45th anniversary by driving the model across a paper bridge in Suzhou, China.

Designed to highlight 45 years of Range Rover innovation, the unique bridge spanned five meters (16.4 feet) and was built without using glue or bolts.  The bridge took three days to construct and it was made using high quality paper supplied by British manufacturer James Cropper PLC.

Land Rover Experience Chief Instructor Chris Zhou was tasked with driving on the bridge and he carefully navigated the model up the steep slope before briefly stopping at the top of bridge.  He then continued with a slow decent before stepping out of the model victoriously.

For the stunt, Zhou used a Range Rover Vogue SCV6 which features a supercharged 3.0-liter V6 engine that produces 340 bhp (253 kW) and 332 lb-ft (450 Nm) of torque.  It is connected to an eight-speed automatic transmission and a standard four-wheel drive system. This setup enables the model to accelerate from 0-60 mph in 7.1 seconds before hitting a top speed of 130 mph (209 km/h).

According to artist and paper bridge designer, Steve Messam, "Paper structures capable of supporting people have been built before but nothing on this scale has ever been attempted. It's pushing engineering boundaries, just like the Range Rover, and the ease and composure with which the vehicle negotiated the arch was genuinely breathtaking."

Gallery: Range Rover drives over a paper bridge to celebrate its 45th anniversary