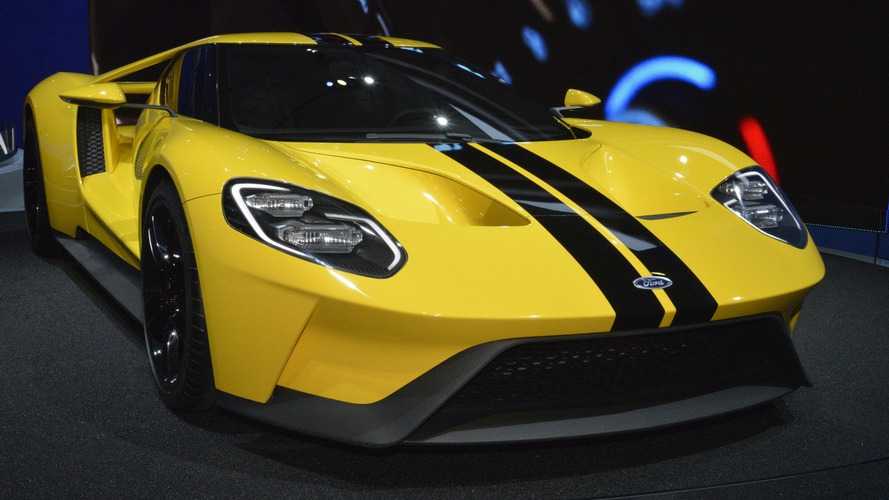 The mesmerizing Ford GT concept now with a yellow paint scheme has arrived in Los Angeles where it shares the spotlight with its track-only sibling.

The mesmerizing Ford GT concept now with a yellow paint scheme has arrived in Los Angeles where it shares the spotlight with its track-only sibling.

The facelifted Escape is Ford’s big debut for LA this year, but the GT concept still grabs a lot of attention even though it was originally revealed in Detroit at the beginning of this year. Now we get to see it with a striking yellow livery combined with central dual black stripes that go from the front all the way to the back. Although it’s billed as a concept, Ford previously said 95% of the design will be carried over onto the production car that is bound to receive larger side mirrors and revised graphics for the lighting clusters.

What do we know so far about the new GT? Its 3.5-liter twin-turbo EcoBoost V6 engine will likely produce 630 bhp (469 kW) and 539 lb-ft (730 Nm) of torque as seen in the car’s stats from Forza Motorsport 6. The Blue Oval company wants to keep the GT exclusive which is why only 250 units will be assembled each year for clients willing to pay the estimated $400,000 starting price. On top of that, the supercar will get optional carbon fiber wheels to help the GT achieve “one of the best power-to-weight ratios of any production car.”

Sitting alongside the GT concept in Los Angeles is its racecar derivative that looks absolutely menacing thanks to its wider and more aerodynamic body featuring a massive rear wing and diffuser. Power will come from the same engine as the road-going car, but obviously adapted specifically for racing. It will officially hit the track next year and will compete at the Le Mans endurance race as well as in the World Endurance Championship and the TUDOR United SportsCar Championship.