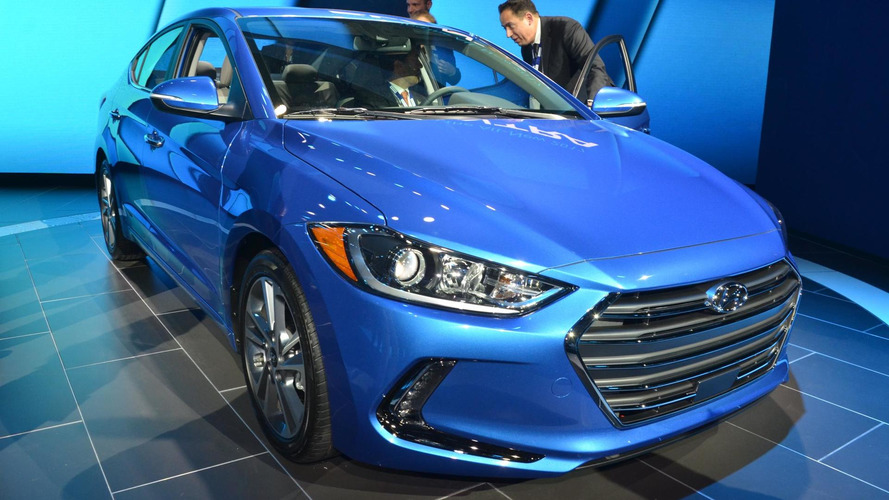 The US-spec Hyundai Elantra has been unveiled during the Los Angeles Auto Show.

The US-spec Hyundai Elantra has been unveiled during the Los Angeles Auto Show.

The 2016 Elantra is almost identical to its Korean cousin – the Avante, revealed two months ago, differing only by the chromed radiator grille and LED daytime running lights. The 4.57 meters long sedan has a drag coefficient of 0.27 thanks to air curtains in the front fascia and underbody cladding.

The company explains the machine is not only lighter than its predecessor, but its chassis is now reinforced with 53 percent advanced high-strength steel compared to 21 percent in the outgoing model. This results in torsional rigidity being 29.5 percent stiffer and a greater bending strength at 25.3 percent, which bring “improvements in vehicle ride and handling, quietness, durability and driving performance.”

Probably the biggest news is hiding under the hood where the car is getting a 1.4-liter turbocharged Kappa GDI petrol engine, pushing out 128 HP (94 kW) and 211 Nm (156 lb-ft). The unit is mated to a seven-speed automatic transmission with two clutches and Hyundai promises a combined fuel consumption of 35 mpg.

The car will also be available with a 2.0-liter Atkinson cycle-type naturally aspirated motor, delivering 147 HP (108 kW) and 132 lb-ft (179 Nm) of torque. This one will be offered with either a 6-speed manual or 6-speed automatic.