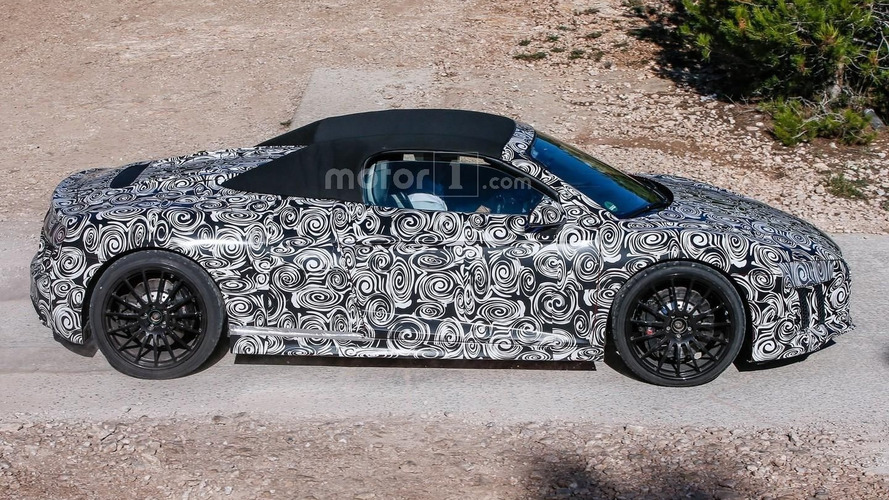 Audi R8 Spyder testing continues as our spy photographers have spotted another fully camouflaged prototype stretching out on public roads.

Audi R8 Spyder testing continues as our spy photographers have spotted another fully camouflaged prototype stretching out on public roads.

Caught on camera somewhere in southern Spain, the open-top R8 was being tested alongside the coupe showing subtle cosmetic changes. Aside from adopting a fabric roof, the most significant modifications can be seen at the back where the Spyder has a more upright rear window and a new ventilated engine cover.

By removing the fixed metal roof, Audi’s engineers had to make some reinforcements to the body structure. Undoubtedly, this will have an impact on the supercar’s weight as it will increase a little bit over the coupe. As a consequence, the level of performance offered will suffer a minor decrease when compared to the standard model.

That won’t matter a lot for someone who is in the market for open-top supercar thrills and is willing to pay more than the €165,000 asking price of a standard R8 Coupe. In the top-spec V10 Plus guise, the R8 Spyder will likely surpass the €200,000 threshold taking into account the equivalent coupe starts at €187,400 in Germany.

Audi will probably decide to introduce the new R8 Spyder in the second half of next year, possibly at the Paris Motor Show set for early October. We are not excluding the possibility of a Geneva reveal in March to have the car ready for deliveries in time for the summer.

Gallery: Audi R8 Spyder spotted testing in Spain with the fabric roof up