Infiniti QX30 arrives in LA looking exactly as you would expect 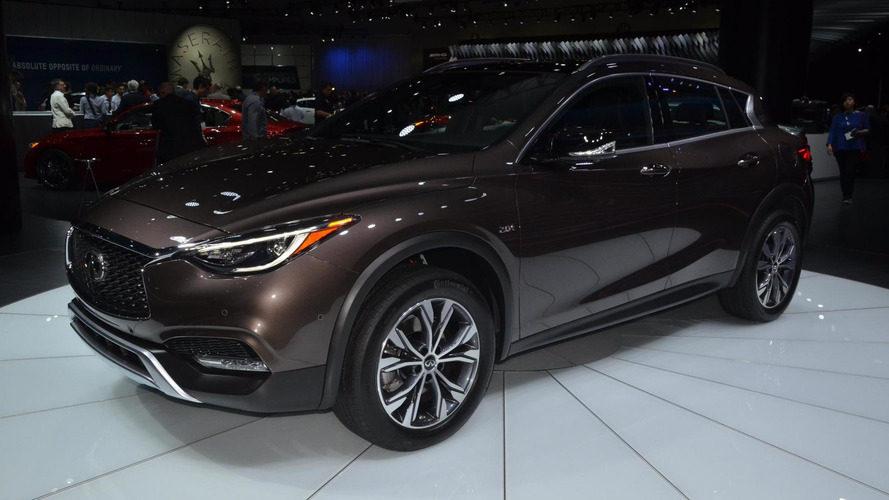 Billed as being a "premium active crossover", the QX30 is essentially a reskinned version of the Mercedes-Benz GLA, just like the Q30 is heavily based on the A-Class. The car's exterior design can be best described as a Q30 on stilts with plastic body cladding and roof rails. There are not any surprises in terms of aesthetics as it looks pretty much the same as the QX30 concept Introduced back in March at the Geneva Motor Show.

The interior cabin closely mirrors its hatchback sibling and as you can see many of the bits and pieces have Mercedes-Benz written all over them. The end result is not half bad, but we are sure many would have wanted to see a bit more variation to set the two cars apart. That being said, it does look like a premium product on the inside and will be a viable alternative to the GLA.

Infiniti is keeping the technical specs shrouded in mystery, but they do say it will boast a clever all-wheel drive system capable of sending up to half of the engine’s power to the rear wheels to ensure optimal traction. It’s obviously the 4MATIC hardware taken from its three-pointed star sibling and will work with a dual-clutch seven-speed gearbox featuring a manual mode.

The Sunderland-built QX30 is slated to go on sale in the middle of 2016 following its simultaneous world premiere this week in LA and at the Guangzhou Motor Show in China.

Gallery: Infiniti QX30 arrives in LA looking exactly as you would expect