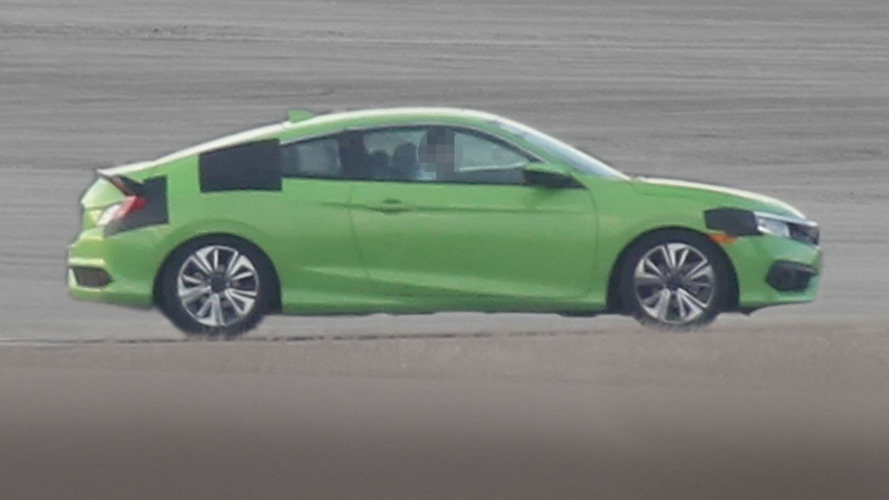 The next generation Honda Civic Coupe has been pretty much uncovered in this latest batch of spy images ahead of the model’s official debut next week in L.A.

The next generation Honda Civic Coupe has been pretty much uncovered in this latest batch of spy images ahead of the model’s official debut next week in L.A.

It was back in April at the New York Auto Show when Honda signaled the imminent arrival of the tenth generation Civic with a rather lovely coupe concept which you can now check out in a near-production guise. As expected, it looks less exciting than the preview concept and we already saw the car courtesy of several official leaked patent designs that surfaced the web a couple of weeks after the concept’s debut.

The significantly sloped roofline of this US-spec prototype almost makes it look like a fastback while the body is painted in a Hulk-like green hue that mimics the concept. This is a non-Si version, so the sportier derivative should look even more attractive and maybe later during the car’s life cycle Honda will decide to apply the Type R treatment to boost the model’s appeal even further.

Just like the sedan, the all-new Civic Coupe will be powered by an evolution of the 2.0-liter naturally aspirated engine with 158 bhp (118 kW) and 138 lb-ft (187 Nm) or the new 1.5-liter turbo rated at 174 bhp (129 kW) and 162 lb-ft (219 Nm) of torque. The N/A engine is teamed up to a six-speed manual or an optional continuously variable transmission whereas the turbocharged unit is paired exclusively to a specially developed CVT.

The Honda Civic Coupe will be unveiled at the Los Angeles Auto Show next week and it will share the spotlight with the Civic Sedan that recently entered production at the factory in Alliston, Canada.