Ferrari 458 by Misha Designs looks like a rocket on wheels 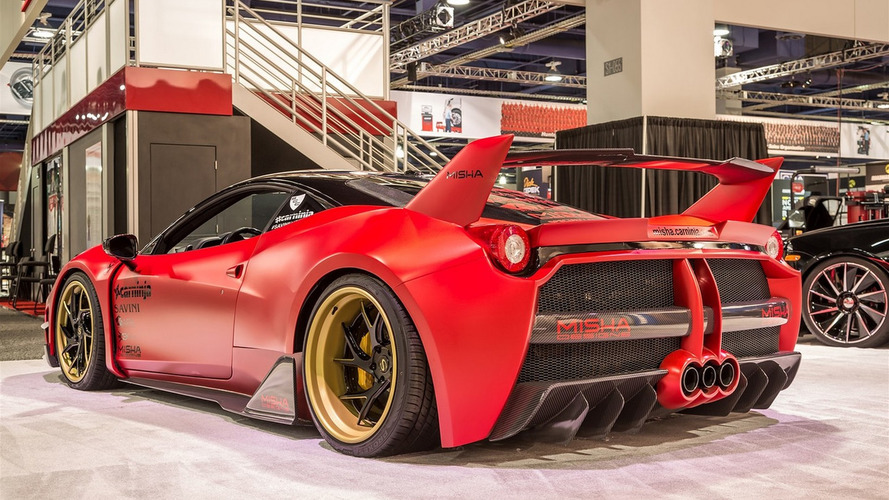 Misha Designs has teamed up with CarNinja to work on a carbon fiber wide body kit tailored to the Ferrari 458 Italia.

Misha Designs has teamed up with CarNinja to work on a carbon fiber wide body kit tailored to the Ferrari 458 Italia.

The kit was previewed back in March this year and made its public debut recently at SEMA in Las Vegas with visual influences from the track-only Ferrari FXX K. It looks pretty much like a rocket on wheels and comes with an appealing matte candy full body wrap contrasted by a glossy black roof and rides on an interesting set of concave wheels wrapped in all-season Toyo Proxes tires.

Misha Designs actually made two versions of their wide body kit, with the standard one including the hood, front bumper, fender, side skirts, rear bumper and wing. The more aggressive package widens the car even further and has side skirts with air ducts while the rear end takes cues from the FXX K thanks to a one-piece carbon fiber wing blade.

Just about every body part has been modified and now the Ferrari 458 Italia looks like it came straight from a Need for Speed game. Misha Designs says they have opened the order books and those who are fond of the more aggressive kit should hurry up as only 20 packages will be produced and you will have to give them a call about the pricing.

Gallery: Ferrari 458 by Misha Designs looks like a rocket on wheels