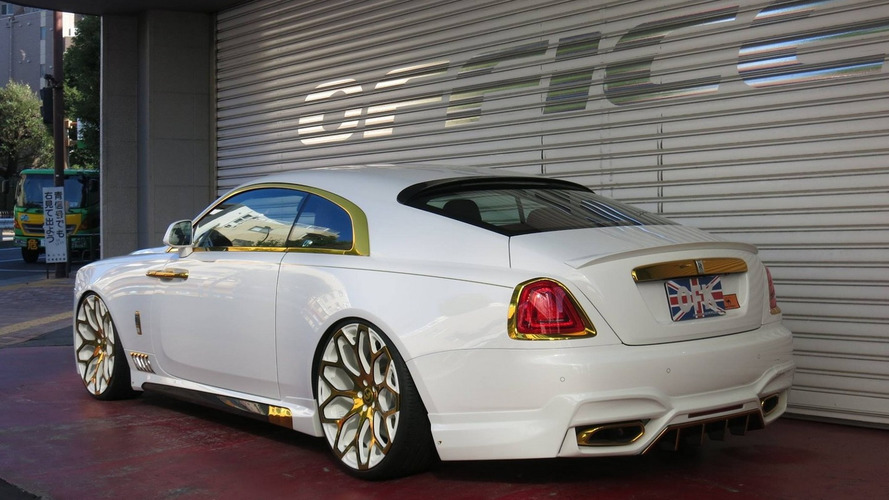 This heavily modified Rolls-Royce Wraith is no longer the elegant coupe that comes out of the Goodwood factory.

This heavily modified Rolls-Royce Wraith is no longer the elegant coupe that comes out of the Goodwood factory.

It was only on Monday when we shared an image gallery with a Rolls-Royce Wraith tricked out by Wald International and now the car is back, only this time it has received a series of tacky tweaks from Office-K. Gold rarely works on a car and this certainly isn’t one of them as the Wraith has lost its beauty due to those flashy accents applied abundantly on the body.

The ridiculously huge 24-inch Forgiato wheels don’t help the cause either and seem to have a negative camber which doesn’t make sense on a luxury car such as the Wraith. It has also received a custom Miracle exhaust system that obviously comes with gold tips while the fins of the rear diffuser have a similar look. We are afraid to ask what is going on inside the cabin, but hopefully they ran out of gold while working on the body.

We know that beauty is in the eye of the beholder, but aside from rappers, it’s hard to imagine there are other people that actually like this sort of aftermarket job. That being said, there must be an audience big enough to keep Office-K in business, along with other tuners that come out with overly flashy visual modifications.

Gallery: Rolls-Royce Wraith by Office-K is not exactly what we would call elegant