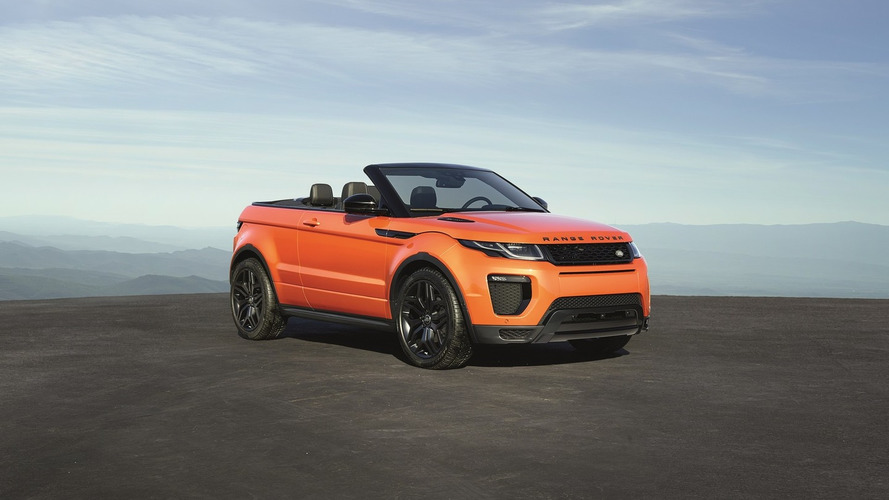 The Los Angeles Auto Show is right around the corner so Jaguar Land Rover has announced their lineup for this year's event.

The Los Angeles Auto Show is right around the corner so Jaguar Land Rover has announced their lineup for this year's event.

First and foremost, the company will unveil the new Range Rover Evoque Convertible.

Previewed earlier this week, the model is a two-door convertible with a power retractable soft top that can be lowered in 18 seconds at speeds up to 30 mph (48 km/h).

In the United States, it will be powered by a turbocharged 2.0-liter four-cylinder engine that develops 240 bhp (179 kW) and 251 lb-ft (340 Nm) of torque.  The engine will be connected to a nine-speed automatic transmission which will enable it to accelerate from 0-60 mph in 7.8 seconds before hitting a top speed of 112 mph (180 km/h).

The Range Rover Evoque Convertible will go on sale in the United States in the middle of next year and pricing starts at $50,475.

Speaking of crossovers, Jaguar will use event to stage the North American debut of the 2017 F-PACE.

Last but not least, Jaguar will introduce the US-spec 2017 XE.

Set to become the brand's entry-level model, the XE rides on an aluminum-intensive platform and will be available with a variety of different engines including a 2.0-liter four-cylinder turbodiesel with 180 bhp (134 kW), a turbocharged 2.0-liter four-cylinder petrol with 240 bhp (179 kW) and a supercharged 3.0-liter V6 with 340 bhp (253 kW).

The model will go on sale next spring and pricing starts at $34,900.